The Evil Monster is a giant evil beast that appears in the episode "Dad's Dungeon" of the cartoon series Adventure Time.

It is the last trial in Joshua's dungeon. Joshua explains in his message that the Evil Monster is tied up in the chamber, but apparently he broke free. According to Joshua, he's "pretty evil. You're going to have a crazy time trying to defeat him!" The Evil Monster's fingers pull Joshua into the dungeon with him while Joshua is recording his message. The Evil Monster seems to be invulnerable except by being stabbed in his eye. He laughs hysterically while attacking, much of which appears to be toying with Finn. Evil Monster is defeated when Finn stabs him in the eye with his newly acquired Demon Sword and throws the Evil Monster into the large hole at the center of the chamber. It is unknown if it was killed or defeated.

He is a giant monster with many green spikes sticking out of its back. His body is very long and serpentine, and has tentacles sticking out of its body that seem to end with green spikes, though some don't. He has long, skinny arms. His left wrist has the key to unlock the Demon Sword chained around it and one of the fingers has a spike on it. His teeth are similar to those of a Lub Glub. He has one eye that looks like a crystal with a pentagon inside. The eye glows very brightly when Finn stabs it. 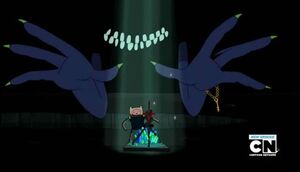 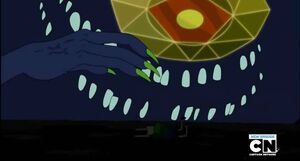 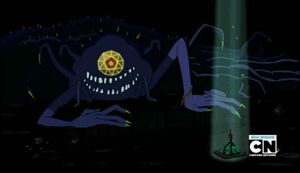