President of the Citadel of Ricks (currently)

Collecting and torturing Mortys to hide his Rick-level intelligence from the Council of Ricks (formerly).

Ruling the Citadel of Ricks (currently).

Cover up his crimes against the Citadel (succeeded).

Become ruler of the rebuilt Citadel and change it for the better (succeeded).

This version of Mortimer "Morty" Smith, named "Evil Morty" by fans and also known as Candidate Morty and President Morty was a major antagonist in the adult animated TV series Rick and Morty, appearing as the hidden main villain of "Close Rick-counters of the Rick Kind" and "The Ricklantis Mix-Up"/"Tales from the Citadel".

He was the creator of Evil Rick Sanchez and the one truly responsible for the deaths of Ricks and abductions of Mortys from different universes; he managed to escape capture and be elected first President of the Citadel of Ricks following the destruction of the public Council of Ricks.

He was voiced by Justin Roiland who also voiced every other version of both Rick Sanchez C-137 and Morty Smith C-137.

Evil Morty made his "grandfather" Evil Rick to cover him in case he and his plans were discovered.

For reasons unknown Evil Morty was intent on killing Ricks and torturing their grandsons Mortys. Using Evil Rick, he successfully killed twenty-seven Ricks and kidnapped their Mortys. Rick C-137 was blamed and hunted down by the Council.

After Evil Rick's death the Council of Ricks returned the Rick-less Mortys to their families to live out the rest of their lives including Evil Morty. By the time all the Mortys were boarding ships to depart to their lives, the Council of Ricks had discovered that Evil Rick was a remotely controlled robot that acted under the orders of someone else. The last time we see Evil Morty, he removes his eyepatch - which held the transmitter for Evil Rick - and destroys it revealing him to be the controller of Evil Rick. Evil Morty then turned to board the departing ships now looking identical to the rest of the Mortys.

In "The Ricklantis Mix-Up" Evil Morty secretly developed an alter-ego to become presidential candidate for the newly-democratic Citadel of Ricks. A Campaign Manager Morty was in charge of the Morty Party though he does not take his own candidate seriously at first. But despite mockery from Ricks and even other Mortys his candidate made a rousing speech about the class divide between the various Ricks and Mortys on the Citadel during a debate which earned him praise and support. Afterwards Evil Morty promptly fired his Campaign Manager for a lack of faith.

An Investigator Rick gave Evil Morty's former Campaign Manager him a file revealing the candidate's true nature. Horrified at the truth, Campaign Manager Morty tries to assassinate Evil Morty to stop him from getting into office and is promptly arrested. Unfortunately for him, Evil Morty survived the assassination attempt and won the election. After the Shadow Council of Ricks revealed themselves as the true power behind the Citadel and informed Evil Morty he would answer to them the newly-elected president had all of them executed save for two who did not share the same sentiment and had become terrified. Campaign Manager Morty was killed by the Rick Secret Service agents and ejected into space. His body is one of the many bodies floating out of the Citadel's airlocks in the aftermath of the new dictatorship's purge. Also among the dead was Investigator Rick who was possibly killed for uncovering Evil Morty's secret.

The planet Evil Rick's lair was hidden on in the universe created by Evil Morty.

The alternate Mortys strapped around the lair.

The method used to torture the alternate Mortys. 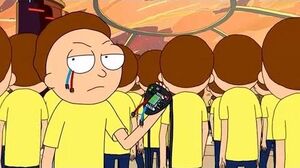 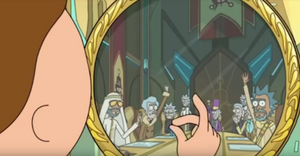 Evil Morty snapping his fingers for the guards to kill the members of the Shadow Council of Ricks opposing him. 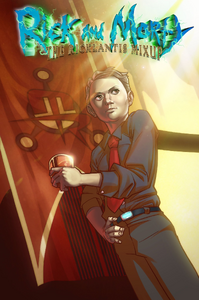 Artwork of Evil Morty.
Add a photo to this gallery