Evil Rick is a creation of Evil Morty and the central antagonist of the episode "Close Rick-counters of the Rick Kind" of the cartoon series Rick and Morty. Evil Rick was used as a pawn by Evil Morty who travelled to several universes, killing numerous Ricks and also kidnapping numerous Mortys in order to complete his goals.

Close Rick-counters of the Rick Kind

At one point, Evil Morty killed a Rick (possibly his own Rick) and turned him body into a cyborg with an implant from his brain to an eye, which he covered up with an eye patch.

Now able to control Rick and cover his plans were discovered, Evil Rick had hacked C-137 Rick's portal gun and traveled to several universes, killing Ricks and kidnapping hundreds of Mortys to frame C-137 Rick so the Council of Ricks would go against him. When C-137 Rick and Morty traced where the signal was coming from, the two set off to Rick's base.

C-137 Morty persuaded the imprisoned Mortys to rise up against Evil Rick, the Mortys bombarded Evil Rick's lair and started to trample Evil Rick to death. The Council of Ricks then came to investigate and take the Rick-less Mortys someplace safe. After close investigation, the Council discovered that Evil Rick was a robotic puppet being controlled by Evil Morty. 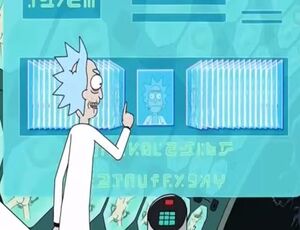 Evil Rick's database of all the Ricks 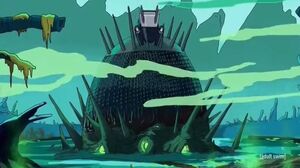 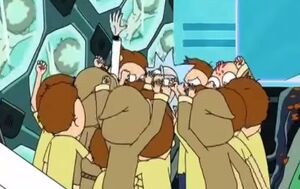 Evil Rick being killed by the Mortys 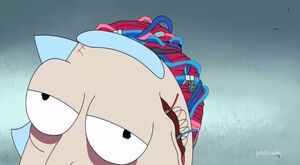