Member of the Star Marshals (formerly)

The Evil Robot, also known as Trio in the Archie Comics, is an alien robot that was fighting Duo in the beginning of Mega Man 8. He was either completely under the immense influence of the Evil Energy, or was the very source of it.

After the aforementioned deep-space battle, the robot was destroyed by his foe Duo in a battle which resulted in the two robots crashing to the planet Earth. Duo managed to damage him to the point where his body went completely inert, but the traitorous and malevolent robot did enough damage to Duo where neither one could slow down to avoid burning up upon reaching Earth.

The Evil Robot's body was last seen on an old island fortress of Dr. Wily who quickly abandoned it upon the discovery of this strange android as the mad doctor found what he came for in the emergence of his new wicked scheme. Though the Evil Robot was destroyed, it was implied that he continued to live on through the Evil Energy that it harnessed, which is what Duo spent the remainder of the game trying to eradicate.

The Evil Robot's name, origin, and connection to Duo were left unexplained in Mega Man 8, as well as its manga adaption and Mega Man Gigamix, but during a flashback in Issue #42 of the Archie Comics, he was given the name of Trio. He was a former ally of Duo's who once belonged to an intergalactic police unit known as the Star Marshals. Twenty thousand years prior to the events of even the first Mega Man game, the Star Marshals were shown to be enemies of the Super Adventure Rockman antagonist Ra Moon, as well as the Stardroids from Mega Man V. Trio and his other teammate, Quartet, who were on a mission to stop to the aforementioned villains, decimated nearly all the Kuiper Droids that were tasked with protecting the Ra Moon, save for the one that would eventually come to be known as Shadow Man. The latter's survival is due to the fact that Trio had chosen to betray his teammates for the power that was promised by Ra Moon (presumably the Evil Energy), effectively leaving Quartet for dead in the process. Trio then allowed Shadow Man to escape and take Ra Moon to safety, while the former goes to fabricate an excuse to his superiors.

As explained above, the Evil Robot/Trio made brief appearances in the Rockman 8 manga and Mega Man Gigamix, playing relatively the same role that he played in the game. He was also featured in the Mega Man 8 portion of Mega Man Legacy Collection 2's artwork gallery. 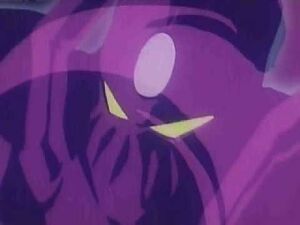 The Evil Robot filled with the Evil Energy surrounding his entire body. 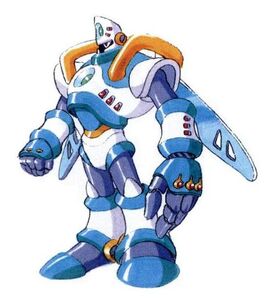 Duo's original design before being remodeled by Dr. Light, which Trio's is a mirror of. 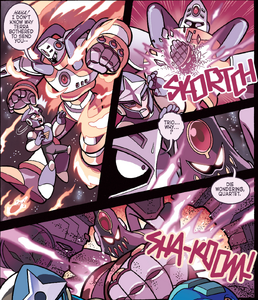 Trio betraying and killing his teammate, Quartet, as depicted in the Archie Comics. 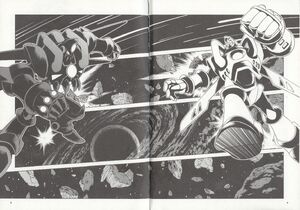 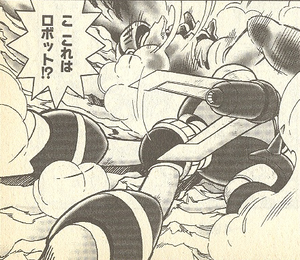 The aftermath of Duo and Trio's battle in the Rockman 8 manga.