Become one with the Satsui no Hado.

It is interesting to note that Evil Ryu does not exist in canon, him being more of a "What If..." character.

Although Evil Ryu himself is not playable, he appears in Ryu's character story in a dream, trying to have Ryu embrace his inner darkness. Due to his rejection, Kage manifested.

SNK vs. Capcom: The Match of the Millennium

Evil Ryu also makes an appearance in the DLC of Asura's Wrath. In this game; Asura has the opportunity to fight both Ryu and Evil Ryu. After their fight, Akuma punches Evil Ryu back into their universe and fights Asura in himself.

Evil Ryu appears as a unlockable skin for Ryu in the online crossover card game TEPPEN. Evil Ryu has different artwork, hero art animations (although their effects remain the same), and voice-lines.

First appearing in the spirit event "Street Fighter 35th Anniversary", Evil Ryu appears in Super Smash Bros. Ultimate as a Neutral-type Legend-rank spirit that makes the user's fist attacks stronger. In his spirit battle, the user fights against a Ryu on the Ω form of Suzaku Castle stage in a Stamina match, with the Ryu having stronger special attacks and sometimes gaining the ability to automatically being able to deliver a Final Smash.

Evil Ryu often appears as a palette swap of Ryu wearing a black gi, though the Alpha series also gives him a black head band. His skin also becomes a slightly darker shade along with his hair. From CvS onward, he has been depicted with red pupils, although some games leave his eyes entirely red.

In Super Street Fighter IV: Arcade Edition, his design was given an update, taking on a much more feral appearance with traits taken from Akuma. His eyes now glow and his hair spikes up with a red tint. Most notable of all is a gaping hole bored into his chest, with a similar scar on his back that bears a glowing ten kanji. The scar resembles the effects of being hit up close with the Medio Gohado that is used by Oni. He appears far more menacing and powerful than his Alpha version. 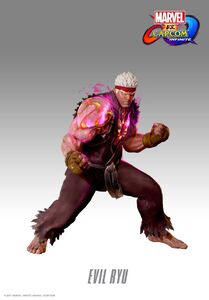 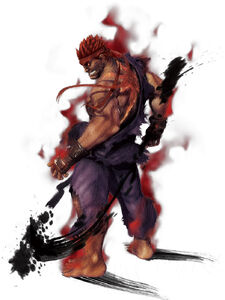 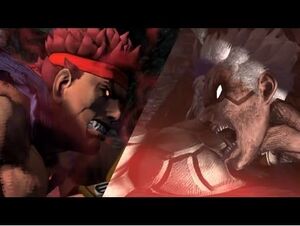 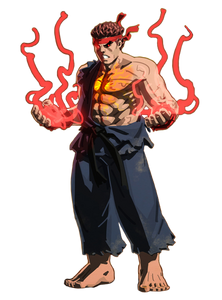