Assist Boingo for his evil plans.

The Evil Ski Team are the secondary antagonists of the 2005 computer-animated film Hoodwinked!. They are Boingo's former henchmen. All of them are of European origin. This team consists of about 4 members (Dolph, Lesa, Vincent, and Keith).

Dolph was voiced by Tye Edwards, Lesa was voiced by Dame Emma Thompson (who also portrayed Karen Eiffel in Stranger Than Fiction, The Woman in Lutins, Sarafine Duchannes in Beautiful Creatures, Goneril in King Lear, The Yeti Elder in Missing Link, Baroness von Hellman in Cruella and Agatha Trunchbull in Matilda (2022)), Vincent was voiced by the late Bob Papenbrook (who also voiced Rito Revolto, Saliguana, Showbiz Monster and Snizzard in Mighty Morphin Power Rangers, Silo and Punch-A-Bunch in Power Rangers Zeo, one of the Forty Thieves in Aladdin and the King of Thieves, Amphibitor, Varox Bounty Hunters and Torch Tiger in Power Rangers Turbo, Sting King, Lunatick and Spikey in Power Rangers in Space, Daemon in Digimon Adventure V-Tamer 01, Deviot in Power Rangers Lost Galaxy, ShogunGekomon, Drimogemon and Mihiramon in Digimon Adventures 01, Musyamon in Digimon Adventure 02, Fireor and Thunderclaw in Power Rangers Lightspeed Rescue, Univolt and Artillicon in Power Rangers Time Force, Majiramon in Digimon Tamers, King Wartlord in The Happy Cricket, Dr. Shishigashira in Cyborg 009, Bell Org in Power Rangers Wild Force, Grigori Rasputin in Shadow Hearts: Covenant, the Black Knight Ghost in Scooby-Doo 2: Monsters Unleashed and Copperfield in The Suffering: Ties That Bind. And also died on 2006 after Hoodwinked! was released in 2005), and Keith was voiced by Robert Knepper (who also portrayed Theodore Bagwell in TV series Prison Break, Rhett Walden in Criminal Minds, King Chichak in Turok: Son of Stone, Jonas Johnson in Transporter 3, William Tockman in Arrow, Kronos in Percy Jackson: Sea of Monsters, Jonah Aldrich in Hard Target 2 and General James Harkness in Jack Reacher: Never Go Back, although he does not speak).

The Evil Ski Team are first seen at the Xtreme Dream Snowsports Competition. During the race, Dolph hits Granny's binding with one of his ski poles. Suddenly, Granny was racing on one ski. After defeating the other racers, the Evil Ski Team makes different attempts to stop Granny, such as throwing snowballs. However, Granny manages to take out Lesa, Vincent, and Keith. Dolph gets extremely angry after Granny threw a snowball at his arm and had Granny holding onto him from a cliff. Granny asks Dolph who does he work for, but Dolph says that he cannot tell her that.

However, Granny orders Dolph to tell her instantly, so Dolph finally gives in and says that he and his sidekicks were hired by the bandit. When Granny loudly asks who the bandit is, Dolph lets go and pushed Granny off of the cliff. Dolph then talks to Boingo on his phone, telling him that Granny is finished, and now they go after Red, the little red riding hood. Granny overhears the conversation and swings back up, using her bungee cord and her clip. Granny then caused a destructive avalanche, and the avalanche crushed the Evil Ski Team, and she finally ends up winning the race.

Later on, Boingo walks into his cable car, and Red follows them and hangs onto the cable car. In a cave lair, Red confronts Boingo and says that she is walking out of his lair with her granny's recipe book. Then Red and Boingo started fighting, and Boingo ended up winning the fight because of his large ears. Boingo then orders Dolph to tie Red up, Lesa to hold the recipe book, and Vincent to get Kirk's schnitzel truck. However, before Boingo can tell Keith to do anything, he tells him to change his name, because he is embarrassed to say it, and suggests "Boris". Boingo then proceeded to sing the song "Top of the Woods" and shows Red his villainous plans to destroy the forest and build his evil empire, and says that the kids will go crazy for his BoingoSnax. The diabolical rabbit then had Dolph put Red in his cable car filled with sticks of dynamite, which Boingo calls "The Dino-Mite Express Home". Outside of the lair, Dolph tackled Granny, but Dolph was beat up by the gang and Wolf bit his leg.

Boingo started locking the door to his cable car when the Woodsman (disguised as Dolph wearing a ski mask) shows up and then Wolf shows up, disguised as a building inspector and walks with Boingo while Kirk tries to get Red out of the cable car, and while Granny hops onto the lights. Unfortunately, a drop from Granny's sweat falls and distracts Boingo. Granny then falls and lands on Lesa and Vincent. Wolf then tries to fight Boingo, but he defeats Wolf at first. Then Boingo lights the rope attached to the cable car on fire and pulls a giant lever that activates the cable car.

After defeating the Evil Ski Team, Granny saves Red by having her climb on her hood, and the cable car then falls into the forest's river and explodes. However, Boingo and his minions are still after Red and Granny, so the heroines both use their hoods to fly up and avoid Boingo and his villainous henchmen. They kept sliding down the wire and into a police van, and they are then taken to prison for their crimes.

He was voiced by Tye Edwards.

Lesa is the second member of the Evil Ski Team. She has black hair and gray eyes. She wears cerise red lipstick. She also has thin, glittering silver highlights on her hair. She wears a red and black ski suit. She is also the only henchwoman in the group. She has only one speaking line in the film, where she yells to 2-Tone to watch out for Dolph. She could also be thirty-eight years old.

She was voiced by Emma Thompson.

Vincent is the third member of the Evil Ski Team. He wears black sunglasses. He is completely bald. He has teal eyes. He wears a black and yellow ski suit. He has only one speaking line in the film, where he, Lesa, Keith, and the animals are lined up at the starting line. He could also be fifty-sven years old.

Keith is the fourth member of the Evil Ski Team. He wears ski goggles. He has blond hair and green eyes. He wears a yellow and black ski suit. He is the only ski member in the group who never speaks, though he does make little noises here and there, such as grunts, growls, or whistles. He could also be forty-five years old.

Despite being a non-speaking character, he was voiced by Robert Knepper. 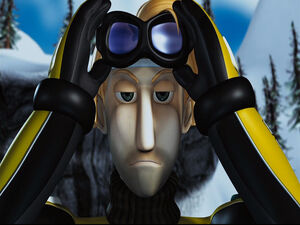 Keith putting on his ski goggles. 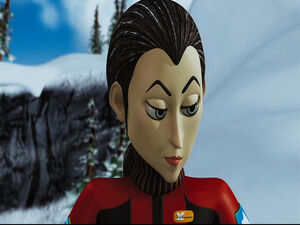 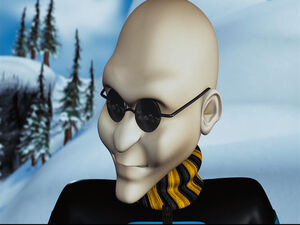 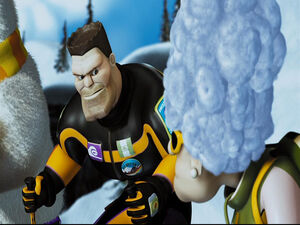 Dolph talking to Granny to be careful for getting hurt on her slopes. 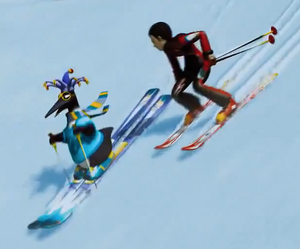 Lesa yelling to 2-Tone to watch out for Dolph. 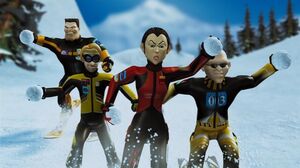 The Evil Ski Team ready to throw snowballs at Granny. 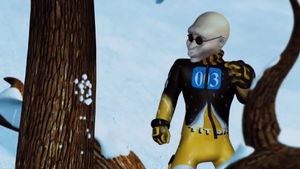 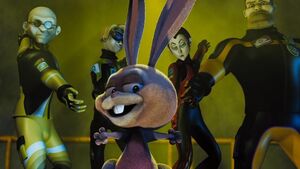 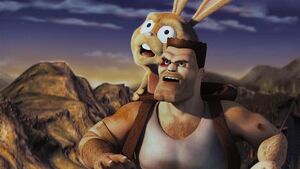 Dolph and Boingo watching Red and Granny fly away before sliding down into the police van. 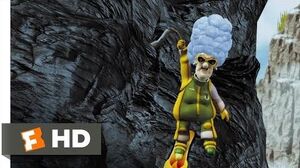