Manipulating others to do her bidding.

Destroy all caring and then either rule or destroy what is left behind (failed).

The Evil Spirit, also known as The Spirit, is the main antagonist of the 1985 animated fantasy film The Care Bears Movie. She is depicted as a sentient magic-book with the face of the malevolent witch on it. She is extremely manipulative, slanderous, uncaring, cruel, and utterly wicked - utilizing a friendless young boy named Nicholas as a pawn by which to take over the world and get rid of everything that is good and pure and replace it with wickedness and corruption.

She was voiced by the late Jackie Burroughs.

The Evil Spirit feigns friendship with Nicholas, promising to teach him to be a great magician, first putting his master, the great Fettucinne into an enchanted sleep. However, during Nicholas' first show, she makes all of his tricks go wrong, causing the children to laugh at him. She feeds Nicholas' anger, and finally causes him to cast the spell that removes their ability to feel compassion, and then encourages him to spread the spell over the entire world as revenge.

She uses Nicholas only for her own benefit and is almost completely without redeeming characteristics - making her a true villain and one of the more evil characters in the Care Bears universe, her power was also seen as great - though she was ultimately little more than a book and as such without the aid of Nicholas, she was much less powerful and persuasive.

In the end of the movie, Nicholas breaks free of the Evil Spirit's influence and with aid from the Care Bears uses a key to lock the book again, trapping the Evil Spirit once more and sparing the world from her vengeful and malignant influence.

The Evil Spirit is a very wicked, cunning, deceitful, manipulative, and ruthless spirit who does whatever it take to get Nicholas to do what she wants him to do. She falsely promises to help him make friends, but instead makes him feel worse about himself, and convinces him to try and get revenge by ridding the world of caring.

She is also shown to be a sadist, as revealed when she enjoyed causing children to violently attack each other as a result of her spell removing their ability to care about others or their actions - she also had no regard for anyone, seeing Nicholas as a necessary tool rather than an actual ally, a vessel by which to further her own influence and she had no qualms about psychologically abusing him whenever she could so as to feed on his anger and insecurity.

Despite this, there is no indication that she is nothing more than a spirit who likes bullying others. By all means, she lies and takes advantage of childern, but she does not have much of a personality outside of sadism. Therefore, one could argue that she does not have enough moral agency to be judged by human standards.

The Evil Spirit initially appears as a feminine yellow face in the book with green eyes and purple lips and eye shadow, but later turns green when she became more powerful. The letters on her pages contain Nordic runes as well as Celtic symbols on the corners of her cover which also has a carving of her face.

Despite being almost useless without Nicholas, the Spirit proved to be very powerful, mostly with the spells written in her book. The Spirit could also enter a more powerful green state, throw things away from her with green waves of energy, and fire a powerful beam of light from her lock.

Although she is shown to be able to perform nonverbal spells, she required Nicholas to cast the "final spell" since she could not gather ingredients and had no usable arms.

She also seems to be only villain who seems to be immune to the Care Bear's Stare and the Cousin's Call, she even used a spell to weaken them to make sure that Nicholas would not lose.

She is one of the most powerful and dangerous foes the Care Bears have ever faced. 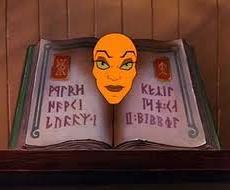 The Spirit (also known as The Evil Spirit). 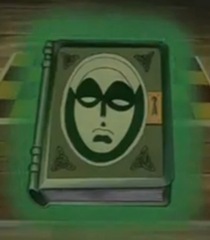 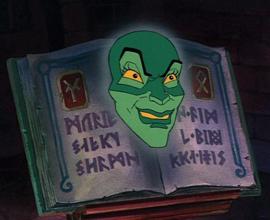 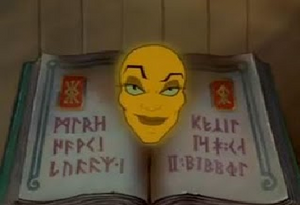 The Evil Spirit (also known as The Spirit).
Add a photo to this gallery

Retrieved from "https://villains.fandom.com/wiki/Evil_Spirit_(Care_Bears)?oldid=3663826"
Community content is available under CC-BY-SA unless otherwise noted.