Ability to control miniature versions of himself called "Starlings" that possess superhuman strength and invulnerability
Ability to use a weapon called the "Star Band" that gives user several abilities,including:Drawing the energy of the stars to prolong Evil Star's lifespan.
Flight
Ability to survive in space
Ability to create force blasts or hard light constructs
Ability to power-up the "Starlings"

Evil Star is a supervillain in the DC Comics universe. He is an enemy of the following heroes and other fictional characters: Green Lantern (Hal Jordan), the Green Lantern Corps, the Guardians of the Universe, the Darkstars, Ferrin Colos, Guy Gardner, Sister Sercy, the Justice Society of America and the Justice League.

Resolving to conquer death itself, a scientist of the planet Aoran developed the "Star Band", a device that would lengthen the lifespan of the wearer and possibly to that of the very stars themselves. However, the scientist had not considered the possibility of any side effects. Unfortunately, the device caused anyone who came into contact with it to commit only evil acts. Years later, the being who now called himself Evil Star laughed as his wife and son grew old, while he remained young. Occasionally, he would remove the star band and shun its evil ways, but he feared death more than his own self-hatred. In the end, he always put the band on again.

Eventually the people of Aoran could stand his evil no longer. They warred against Evil Star but failed to defeat him and he killed them all for getting in his way. Seeking new worlds to conquer, Evil Star realized he would soon have to eliminate the Guardians of the Universe who would naturally oppose him. Though his star band was a weapon of almost limitless potential, Evil Star also produced five Starlings - artificial, miniature, virtually mindless clones who were almost as strong as Evil Star himself and utterly invulnerable, as well.

Thus armed, Evil Star attacked the Guardians but was ultimately defeated by Hal Jordan, the Green Lantern of Space Sector 2814 and imprisoned. Evil Star has escaped on several occasions, but each time he has battled the Emerald Gladiator, he has lost and been returned to his Sciencell. When the Green Lantern Central Power Battery imploded after the "death" of the renegade Sinestro, Evil Star was one of the many interstellar criminals who escaped imprisonment on Oa. While Hal Jordan was occupied on Oa, Evil Star fled to Earth and joined forces with Goldface. The two rogues were able to briefly separate the Lantern from his power battery but even together they could not defeat their mutual enemy. While Goldface escaped, Evil Star was re-captured and placed in a rehabilitation community overseen by the Guardians.

Sometime later, Evil Star would be transferred to a low-level security facility for further rehabiliation. He had been making great strides in his progress in renouncing his evil ways and his want for immortality and power was giving way to feelings of guilt and remorse. Unfortunately, during an experimental treatment procedure, his dormant subconscious urges resurfaced and the previously directionless Starlings were given a new purpose to focus on - freeing their master. Upon his escape, Darkstars and Green Lanterns alike were called in to apprehend the villain After fighting off the Starlings and the villain himself, the heroes were able to apprehend Evil Star and take him into custody. During the Underworld Unleashed series, Evil Star was freed by Neron and given enhanced Starlings in exchange for giving Neron his soul. Still, Evil Star was defeated once more by Ferrin Colos and Guy Gardner and returned to confinement. With his most recent escape, Evil Star has been revealed as the secret manipulator behind Black Hand's transformation through experiments performed by Kroloteans. He has also been mentioned as oppressing the home world of Blue Lantern Sister Sercy.

Ninety years ago, the man now known as Evil Star was suffering from a disease. He utilized a device to channel cosmic into his body, curing him and giving him powers. The cure came at a cost as as his lover was killed by his new-found powers. Evil Star drained her life-force into himself. At some point, he was captured by the Green Lantern Corps and imprisoned in a Sciencell. He was among numerous prisoners set free just before Oa was destroyed by Relic. The prisoners were offered a chance to join a Khund/Durlan alliance in an assault against the Corps. Instead they joined forces with the Green Lanterns against a common enemy

Guy Pompton, owner of Ace Movie Rental Agency and a crimelord, donned a costumed identity to stop a movie studio from completing a film that used a script that would have exposed his criminal activities. He fought the Justice Society of America but was defeated. Unlike the other Evil Star, Guy Prompton possessed no superhuman abilities.

In the Elseworlds tale, Batman: In Darkest Knight, a version of Evil Star exists. Harvey Dent was the Gotham District Attorney and was shown to be more supportive of Green Lantern than Commissioner Gordon. Sinestro, after becoming deranged from absorbing Joe Chill's mind, scarred Dent's face and empowered him along with Selina Kyle (known as Star Sapphire) and sent them out to kill the Green Lantern, with Dent known as Binary Star. Even though they were defeated, the pair managed to escape back to Sinestro.

In the Elseworlds tale, JLA: Another Nail, the follow-up to JLA: The Nail, Evil-Star makes an appearance.

Other Types of Media

Evil Star was voiced by Paul Frees in "Evil is as Evil Does". In this show, Aquaman and Green Lantern have to team up to defeat him which they are eventually are able to do.

Evil Star appears in this show as a member of the Legion of Doom voiced by an uncredited George Newbern. At one point Flash desguised as Lex Luthor asks him what his part in a plan but he claims to have no part in it. When Gorilla Grodd lead a mutany against Luthor he sided with Luthor and wound up being one of the only survivers of the Legion's headquarters exploding. In the end he along with the other villains and the League fought off Darkseid's invasion.

Evil Star was voiced by J.K. Simmons in this series. He appears in the episode "Revenge of the Reach!" where he fights Blue Beetle in space and nearly wins but Beelte was able to descover his weakness which is blocking out the stars which is his source of power. In the end he was delivered to the Green Lanterns. 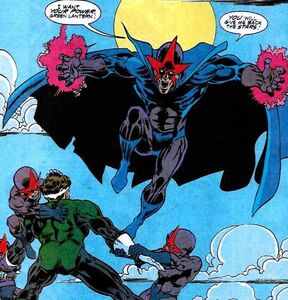 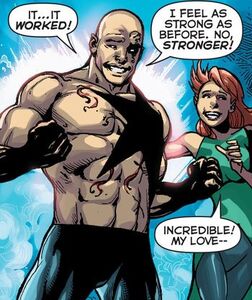 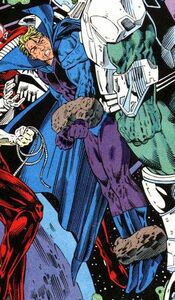 Evil Star without his mask 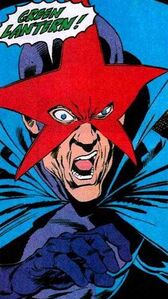 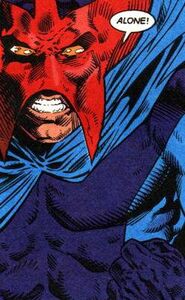 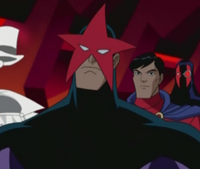 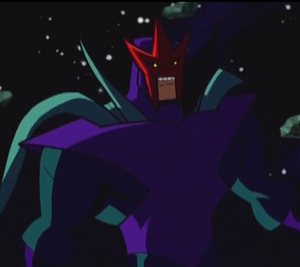 Evil Star in Batman: The Brave and the Bold