Kill anyone who stands in his way.
Kill Stewie and Brian Griffin (all failed).

Jag, also known as Evil Stewie, is the second clone of Stewie Griffin and a minor antagonist in Family Guy. He appears in the episode "The Hand That Rocks the Wheelchair" as the main antagonist.

Just like the actual Stewie, he was voiced by Seth MacFarlane.

When Brian Griffin told Stewie that he was going soft when he failed to shoot a boy, Stewie invents a machine that is supposed to make him more evil, but it instead creates a clone of him and puts all of the original Stewie's evil into the clone.

Later, Evil Stewie stuffs two batteries up Brian's nostrils and strangles him with his collar. Stewie comes along and Brian fears him, thinking he was the one who tried to kill him. Brian then sees the evil clone behind Stewie, and Stewie decides to do some testing on him. However, the Evil Stewie brutally beats him up. He then cuts off Brian's tail with a pocketknife, and tries to choke Stewie with it. He then runs off and slices a woman in half, and steals her car. He later lures the Kool Aid Man to his demise and beats him with a baseball bat.

In the deleted scene, Evil Stewie found the kid who kicked over Stewie's sandcastle and noogies him to death, and then murdered his parents after they came home.

At the end of the episode, Brian is tied to a pole, luring in Evil Stewie to kill him, just in time for Stewie to catch him. The two engage in combat, with both their clothes removed, leading Brian to choose which one of them to shoot. Brian comes up with a simple solution, and Evil Stewie is killed. However, as Brian and Stewie are leaving the park, Stewie turns around with yellow cat eyes, and a nightmarish laughter is heard (which is a possible reference to the end of Michael Jackson's "Thriller" music video). If Brian didn't mistakenly kill the original Stewie, it is also possible that Stewie may have regained some of the evil that he lost from early episodes.

Evil Stewie's creation, plus the plot of the episode, was likely made as a gag to how Stewie's behaviour changed through the show. In early episodes, Stewie seemed downright evil as he constantly planned to kill Lois (among other acts), in contrast to later episodes.

His personality is much like that of the original Stewie from the earlier seasons, but far more sadistic. Also unlike the original Stewie, he is extremely malicious, violent, and willing to kill. While he either tortures, mutilates, traumatises and often kills anyone he comes across, it isn't clear if he actually has any higher ambitions in life other than spreading carnage. 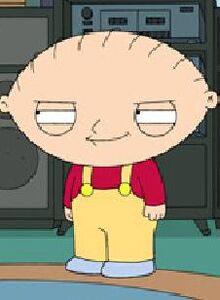 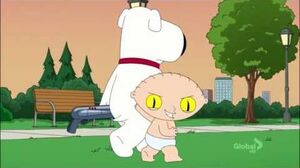