Take what he wants.

The Evil Sumo is an antagonist from the 2008 puzzle platforming video game LittleBigPlanet. He is a giant evil sumo wrestler who leads an army of ninjas, and uses them to steal Grandmaster Sensei's castle. He appears as the boss of The Islands level "Sensei's Lost Castle".

Before Sackboy arrives at The Islands, the Evil Sumo and his army of ninjas steal her castle from her and take it over, using it as a base. They also kidnap the flame-throwing cat, which is being held in one of the towers. Sackboy later arrives at the Islands and Grandmaster Sensei tests his skills as a ninja warrior. Sackboy passes, so the Grandmaster tasks him with breaking back into her lost castle and taking it back from the Evil Sumo and his army.

Sackboy uses a catapult to break into the castle, and navigates traps and puzzles to ascend higher up. Ninjas come out of hiding and attack, but Sackboy fights his way through all of them. Eventually, Sackboy comes across a chamber where he must fight the Evil Sumo's two bodyguards, two fat ninjas. After beating them, Sackboy heads through to the next chamber. As Sackboy is about to pass through, the door suddenly slams shut and the Evil Sumo drops down on top of him.

The Evil Sumo attacks with fierce kicks and stomps, trying to squash Sackboy. Sackboy must get below Evil Sumo and destroy the brain bubbles on the boss' buttcheeks, then escape without being crushed. Sacboy must then time his next jump to land on Evil Sumo's foot right before he kick, throwing Sackboy up into the air where he can grab onto the lanterns hanging above and swing to Evil Sumo's shoulders, popping the brain bubbles there and and on the top of his head, killing the Evil Sumo.

As Sackboy exits the chamber, the ninjas respect Sackboy for defeating their evil master, and allow him exit and give back the castle. Sackboy frees the flame-throwing cat and leaves the castle, where he is thanked by Grandmaster Sensei and told he is ready to face The Terrible Oni.

The Evil Sumo is a brutish and arrogant thief who takes what he wants and giving nothing back. He is not afraid to fight whoever he deems a threat, and fights wrathfully. He also seems to be abusive towards his minons, since they are seemingly glad to be rid of him and respect Sackboy for defeating him. 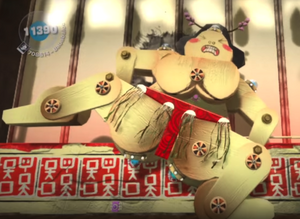 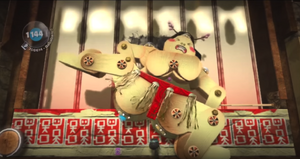 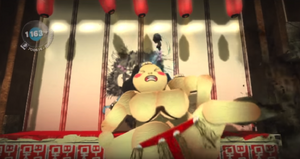 The Evil Sumo's death.
Add a photo to this gallery 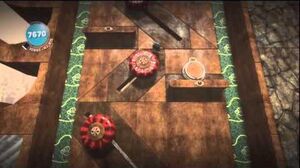 Retrieved from "https://villains.fandom.com/wiki/Evil_Sumo?oldid=3536202"
Community content is available under CC-BY-SA unless otherwise noted.