Destroy Crash's world and get revenge on Dr. Neo Cortex for sending them into the 10th dimension (failed).

Victor and Moritz, better known as the Evil Twins, are the main antagonists of Crash Twinsanity. They are highly intelligent parrots with immense power that have been forced to live for years in the harsh environment of the 10th Dimension because of an incident involving Dr. Neo Cortex.

They were voiced by Quinton Flynn.

The history of the Evil Twins reaches back before the events of Crash 1. They originate from Crash's dimension as Cortex's pets and claimed that the scientist ruined their lives. The trouble started when Cortex was 8 years old and studying at the Academy of Evil. He was testing a prototype of the Evolvo-Ray with Victor and Moritz as the two test subjects. However instead of evolving them, the rays beam made them disappear into the mysterious 10th Dimension where the severe radioactive conditions started to sharpen their skills and warp their "fragile egg-shell minds", eventually turning them into the twisted duo known as the Evil Twins.

Many years later, the Evil Twins devise a plan to eliminate Cortex as revenge for their suffering and destroy the world which they originate from. They soon confront Cortex and Crash after they exit the caverns of N. Sanity Island, where the twins announced that they are going to destroy the pairs "precious islands" and neither of them will be around to see it. Cortex does not take them seriously, so to prove their power Victor removes Cortex's Brain from his head, causing him to flee in terror. The twins later confront Crash and Cortex at the Tikimon statue, where the parrots reveal that they are from the 10th Dimension and then animate Tikimon to kill them. However Tikimon is defeated, forcing the twins to flee, but not before mentioning their plan to convert Crash's Dimension into “the worst of all possible worlds” with their Vice-Versa-Reversa Device.

The twins later appeared in Cortex's Iceberg Laboratory after they defeated the combined might of Aku Aku and Uka Uka. Victor taunts Crash and Cortex, telling the duo that they have the power to manipulate reality itself, allowing them to devastate entire dimensions. Moritz mentions they have also amassed riches beyond imagination, much to Victor’s annoyance. The twins then unleashed an Ant Drone assault on their foes which was soon stopped, making them retreat once again.

The protagonists eventually had their final confrontation with the Evils Twins within the twins’ stronghold, which was located in the 10th Dimension on Twinsanity Island. Victor and Moritz explain how their experiences lead them down the road to villainy and how it helped them to become powerful conquerors, with Moritz claiming they've learned from the best. Cortex agreed with the twins before becoming enraged with the pair, demanding they return to their cage immediately. The twins actually comply due to their “regimented upbringing” before using their powers to transform the cage into a giant Death-bot. Working together, Dr. Cortex, his niece Nina, and Crash piloting the large Mecha Bandicoot manage to destroy the the Evil Twins’ Death-bot and foil their plans.

Although the Evil Twins escaped, they still met a gruesome end after they became trapped in Evil Crash’s house and are both eaten alive by Evil Crash himself. 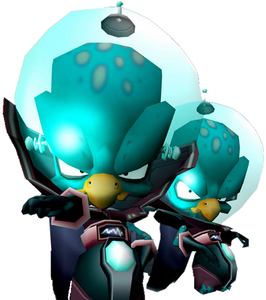 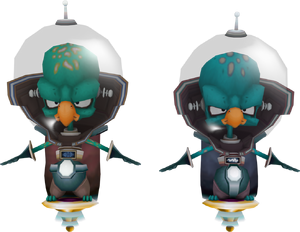 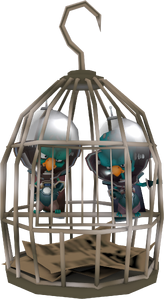 The Evil Twins as normal parrots. 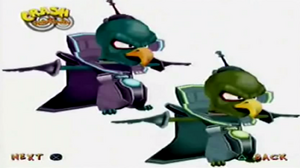 Beta concept of the Evil Twins. 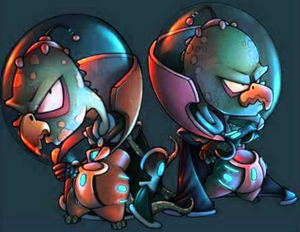