The Wicked Witch of the West

Oh Beautiful One
Witch of the West

Rule all of OZ (both failed).

Evillene, also known as the Wicked Witch of the West, is the main antagonist of the 1975 Broadway musical The Wiz and the 1978 film version of the same name.

Her enemies are Dorothy, the Scarecrow, Tin Man and the Lion. She wants to avenge the death of her sister Evermean and to retrieve her silver slippers.

Evillene's henchmen are the Winkies and the Flying Monkeys. The Flying Monkeys capture Dorothy and her friends. Evillene tries to take back the silver shoes but her powers are worthless against Dorothy. Evillene tortures Dorothy's friends. This includes Dorothy's little pet dog, Toto, with Evillene threatening to burn him alive. But just as Dorothy is willing to surrender, the Scarecrow (while still split in half) hints Dorothy toward a fire alarm. Just as Evillene screams at Dorothy, Dorothy pulls the fire alarm, activating the sprinklers and putting out the fire; this also manages to melt Evillene (as a result of her being allergic to water) as she disappears and is flushed down her toilet throne. 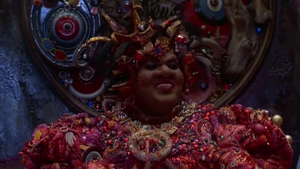 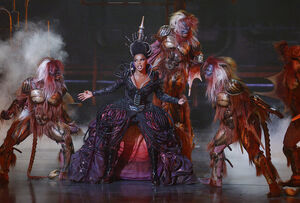 Mary J. Blige as Evillene in The Wiz Live!.