Excella Gionne is the secondary antagonist of the 2009 video game Resident Evil 5. She was a highly decorated executive of the Tricell Pharmaceutical Company who conspired with her benefactor Albert Wesker in his terroristic plans to accomplish Project Uroboros by spreading the virus across the world.

She was voiced by Nina Fehren.

Excella is very intelligent and very productive but her arrogance and disgust to human nature is her biggest problem. Excella is very calm and very little in showing fear of the enemy like when Chris and Sheva demanded answers, and she taunts them. Although she experienced her true fear when she is betrayed by Wesker.

Excella has black hair that's curled in to a bob. She has a necklace and wears a bracelet on her left arm. She wears a white short dress that reaches her knees. It is connected from a ring that's from her backside her dress reveals ample cleavage. She is also very tall having a height of 5'9 and wears golden heels.

Excella hails from an extremely wealthy Gionne Family renowned for their hugely successful export-import business dating back to Medieval times. Her grandmother, who is a bloodline of Travis Household, the founder of TRICELL, making Excella a noblewoman with quite a status. Even as a child, Excella possessed high intelligence and business skills, passing through school and studying at a university at a surprisingly young age. She majored in genetic engineering and eventually became an employee of Tricell.

Regrettably, her awareness of her own beauty and supreme intelligence compounded by her have-it-all elite upbringing had made Excella very arrogant and enormous pride to boot, especially towards men. Then occurred an event that would shatter her mountaineous pride: Excella unsurprisingly was scouted into TRICELL but due to the fact that Excella was not a direct descendant of the Travis Family but an oblique lineage, she ran smack into a glass ceiling by bloodline. Because of this, Excella was offered only a single research team out of enormous research personnel and researchers employed in TRICELL. Outraged at this treatment, Excella was steadily but slowly climbing up the company’s corporate ladder. Then one day, there came a man who would completely change Excella's life, and her ultimate fate.

Albert Wesker quickly saw through Excella's talent and her big egos and decided to utilize her for his project. With help form Albert Wesker, Excella quickly rose through and to eventually become a major official in the company, as well as gaining an infatuation towards Wesker, which he used to his advantage. Excella was convinced by him to become the director of TRICELL’s Africa Division and, after becoming a Global Pharmaceutical Consortium officer, reopened Umbrella’s abandoned Kijuju research facility so as to get at the flowers containing the original Progenitor virus. Excella and Wesker used it to create the Uroboros virus, which they planned to use to create a race of enhanced humans, as well as wipe out those they considered unworthy.

From Excella's point of view (who had always looked down on men), Albert Wesker is the first man ever in her life who surpassed her in every way, especially in intelligence and charisma. And it was Wesker who aided her to her quick ascension. To her, Wesker was her greatest trump card and her savior. Eventually Excella would find herself attracted to him.

In order to deal with any interference from the BSAA, Excella and Wesker used Las Plagas to create Type 2 and 3 Plagas. They were aided by Ricardo Irving, who most likely supplied them with Las Plagas from the black market. They then dispensed the parasites throughout the people of Kijuju to turn them into Majini and set them against Chris Redfield and Sheva Alomar, who had been sent to investigate Tricell’s mysterious activities.

Excella was also entrusted by Wesker with a serum needed to balance his virus based superhuman powers called PG67 A/W. After Chris and Sheva were forced to fight the monster, U-8, in Wesker and Excela's facility, they were contacted by Excella.

Sheva demanded to know why she was performing these experiments and Chris demanded to know where Jill was. Excella denied any knowledge of Chris’s former partner and told them to leave or lose their lives. Sheva knew that Excella wasn’t telling the truth and Chris believed she had been the one to send U-8 to attack them. Later, Excella was injecting Wesker with a sample of PG67 A/W and told him that the preparations for the ship they were using was almost ready. She expressed surprise at the fact that the Las Plagas and Uroboros had worked so well and how they had secured her position in Tricell.

However, Excella said that she wanted something greater and asked Wesker if she had proven herself worthy of standing alongside him in the new world. He said that she may have proved herself but his callous personality made him push her away. After Jill, now under Wesker’s control, came to inform them that Chris and Sheva had arrived, Excella noticed that he showed concern about Chris. But he said that he would not allow any interference at this point in his plans and Excella and Jill left with a briefcase of PG67 A/W. Chris and Sheva later heard Excella and Wesker talking on the radio and found their way into a lab, where they found a test subject sitting in a chair. Excella appeared in an observation area above with the cloaked Jill next to her and Chris demanded to know where Jill was.

She brushed off the question, saying that he sounded like a broken record. Excella began talking about evolution as the subject rose and started to transform, much to Chris and Sheva’s confusion. It then transformed into the Uroboros creature, Mkono, and Excella and her masked companion left the agents to fight it. After defeating the creature, Chris and Sheva found their way to a room deeper in the facility where they found Excella. The masked Jill attacked them, but her mask was knocked off in the fight and Wesker appeared. He then revealed that the masked woman was Jill who was under the effect of a mind controlling chemical called P30. Excella left to finish preparations while Wesker and Jill fought the pair, later calling him to tell him that things were ready. He left and boarded the Tricell tanker that had been prepared for their plans, with Chris and Sheva in pursuit after freeing Jill. They found Excella in a room on the ship with Progenitor virus flowers, while she was packing up two cases of PG67 A/W.

As they were trying to get information out of her, Excella made a break for it, but dropped one of the cases in the attempt. Chris and Sheva took some vials, knowing that they had to be important if Excella had been so determined to protect them. However, the two encountered her on the deck of the ship, next to a pile of Majini corpses, in horrible agony.

When Chris demanded an explanation as to what was going on, Excella cried out to Wesker, demanding to know how he could betray her after all she had done. He stated over a PA system that she was nothing more than a pawn in his plans and that Uroboros had been injected into her. Wesker also hinted that he'd known Excella would prove to be incompatible with Uroboros and said that she had one more thing to do for him. With one final cry of “ALBERT!”, Uroboros tentacles burst from Excella's mouth and consumed her body, along with the dead Majini and grew to a massive size. Thus was born Uroboros Aheri. It swarmed throughout the ship and attempted to attack Chris and Sheva, who were forced to flee from the abomination, before finally destroying it with a satellite laser on the top of the ship.

Excella carrying around a Berreta 93R handgun with her. 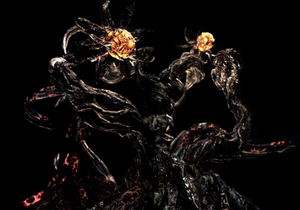 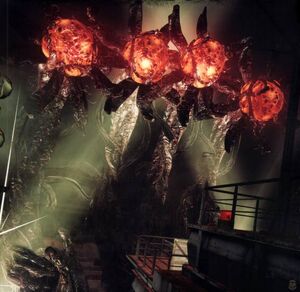 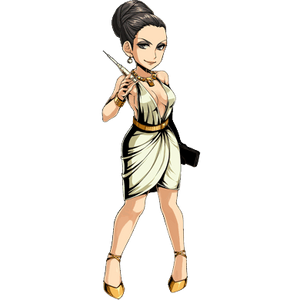 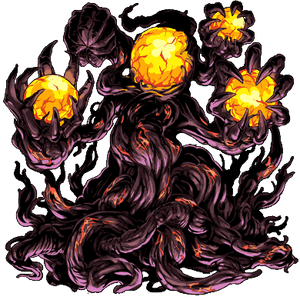 Excella as Uroboros Aheri in Minna to BIOHAZARD Clan Master.