Killing or eating every non-Exos they see (other Exos)
Researching Exos to make them evermore lethal (Dr. Kamsky)

Exos (экзо in Russian) are fictional creatures from the survival horror video game Cold Fear, and are main antagonists of the game.

Exos are enigmatic, parasitic organisms originated ffrm the deep, dark sea of Bering Strait for unknown periods of time until they were accidentally discovered by the employees of Russian Oil Rig named Star of Sakhalin, making Exos part of Earth's ecosystem.

Colonel Dmitri Yusupov, the corrupt military commander of Star of Sakhalin and staffed by Major Yuri Anischenko and his team of mercenaries, witnessed that Exos have the ability to parasitize and take control of their hosts by entering tgeir mouths. Intrigued, Colonel Yusupov 'invited' a prominent scientist and biologist doctor Viktor Kamsky to perform various experiments on the various species using the newly found creatures. To ensure Viktor's compliance Yusupov ordered his Red Mafia connection to have Anna Kamsky, Viktor's daughter, kidnapped and imprisoned in Eastern Spirit, a whaling ship under the ownership of Yusupov's Red Mafia associates.

Further observations of experiments on Exos revealed that not only Exos possess take control of living hosts, but also have the ability to revive the dead hosts by employing the same parasitizing method. To prevent hosts parasitized by Exos from going homicidally insane, a few antidotes to destroy Exos within were developed. Now that both antidotes and Anna are in his hands Yusupov insisted Kamsky to do the unthinkable: experimenting on living humans. Kamsky and his colleague Pavel Bakharef had not other options but to comply.

So the two scientists and their researchers performed their experiments of Exos on humans. Through experiments after experiments Kamsky and Bakharef succeeded in making more Exos, which were already dangerous to begin with, even more vicious and hostile... But neither scientists had produced methods to control these horrible abominations.

Numerous experimentation of Exos had resulted Kamsky and Bakharef exhausted of host supplies, and Yusupov continued to supply fresh human guinea pigs: Yusupov's Red Mafias oversaw the continuous flowing of human host trafficking to Star of Sakhalin, using the whaling ship Eastern Spirit where Anna Kamsky was held captive. At this point Eastern Spirit is not really a whaling ship, but a human trafficking vessel under the guise of a whaler.

Over time, Exos experimentation had produced various creatures with different abilities such as being invisible, possessing superhuman strength, being invulnerable to firearms, etc. The Exos research promised endless potentials with limitless evolution yet to come. At this point Dr. Kamsky grew obsessed with the idea: "What if I can harness these great potentials?", "What if my body can possess these awesome powers?" Kamsky became increasingly immersed in his Exo research to the point of being fanatical, ultimately resulting his colleagues and even Yusupov being afraid of Kamsky and avoiding him. Now the kidnapped victim is even more fervently committing inhuman acts than his kidnapper/perpetrator, the role and situation of the two sides had been reversed.

As discussed before, Exos are parasitic organisms with physiology and nature that so bizzare that they initially believed to be alien lifeform from unknown origin until further study on them revealed them to be part of earth's ecosystem in spite of surrounded by mystery. One of notes scattered at labs in Star of Sarkhalin mentioned that they had DNA from various animals known to man, including mammals. Other notes also indicated that pollution from either nuclear waste or chemical used for the drilling process may contributes mutations that led to birth of these creatures, but there's no solid proof to confirm this. But regardless, their physiology as parasitic lifeform attract Yusupof's attention on them and coerced scientist to study and weaponized them for their gain.

Exos started their life as small 5 tentacled creature called exocel. Exocels lived to infest nearby lifeform they can find, still living or newly deceased, by entering their mouth. Once entered the host's body, the parasite will (possibly) dissolved into cellular, virus-like form before reformed around the host's brain. Should the exocel reformed around the brain, the host will die and succumbed under their control with the exocel attached its tentacles on the brain and spinal column. Upon controlled by the parasite's control, the host will reduced into feral and homicidal semi-sapient berserkers, attacking non-infected lifeforms on sight to make more corpses for other exocels.

When entering an environment full of potential hosts, an exocel will undergo metamorphosis into a large, immobile tentacled biomass called Exo Hive on the wall at a secluded place and produces several pods that will hatch into newborn exocels. Exocels around this Exo Hive, whether have infested a host or not, usually more aggressive than others who roam free far from it, driven by instinct to protecting their parent.

Experiments done on some exocels by Kamsky and Pavel in an effort to find the way to control them bestowed some exocels additional ability to wholly merged with the host in cellular level. The merging between the host and the parasite resulted the birth of more powerful and deadly creatures such as Exoshades and Exospectres.

Though majorities of exos usually behave like instinctive berserkers, some of them, particulary the ones enhanced by experiment, displayed better intelligence than another. For instance, Exoshades displayed remarkable intelligence and mindset of ambush predator who uses darkness as its advantages as well as using its EMP shriek to temporarily deactivates light sources before caught their prey off guard. Exospecter on the other hand, utilized its ability to camouflage with its surroundings before jumped at their foes for surprise attack. While feral and hostile to begin with, some, if not all of the exos may implied to act from degree of malice and cruelty: Exo creatures Hansen encountered prone to mutilating its victims, often leaving them unsuitabe to be infested by its brethren. Bakharev once mentioned in his notes that other thing that disturbed him aside Kamsky's obsession with Exocels was one of an Exo creature that constantly glares and watching him as if it developed deep desire to killing him, which become evident with it made several attempts to broke free from its cage. Bakharev become more and more disturbed with the creature as it developed new abilities and believes that it will come for him someday (which it finally did where upon the outbreak at Star of Sakhalin ensued, the creature, now an Exoshade, killed the scientist not long after saving Tom Hansen).

The main story begins with a Navy SEAL team deploying on Eastern Spirit, adrift in the Bering Strait. As the team explore the deck, they are attacked and killed by Exos that literally rips them apart. Seeing his team is gone in a flash, CIA Special Agent Jason Bennett, who is supervising the mission from another location, orders any other government vessel in the vicinity to investigate. His call is picked up by the US Coast Guard ship, the USCGC Ravenswood, which heads to Eastern Spirit. The crew of the Ravenswood split into teams, but within moments of boarding, only one remains; Tom Hansen, an elite special force soldier turned Coast Guard sailor on a remote region, hears his shipmates being slaughtered over the radio. He sets out to explore the ship and determine what is happening.

As soon as he enters the interior of the Spirit, however, he is attacked by a multitude of non-parasitized Russians gone insane by fear, all of whom attack him and Hansen is forced to kill them. He also finds several horrifically mutilated bodies, including that of the Ravenswood's captain. At disarray, Hansen heads to the radio room to request help, but instead he is answered by Bennett, who tells him that Yusupov is on board and must be captured for questioning. Bennett tells Hansen that if he finds Yusupov, the CIA will get him off the ship. Hansen soon encounters and learns of creatures known as an 'Exos'. He also learns the connection between Exos, Yusupov, Dr. Kamsky, Red Mafias and their experiments on various species including humans.

After fighting off more paranoia-crazed Russian mercs and Exos, Hansen locates Yusupov, who tells him that Anna Kamsky, Viktor's daughter, is onboard and must be saved. An Exo then bursts out of Yusupov's chest, killing him. Hansen eventually finds Anna, who tells them they must go to the radio room and contact her father. They contact Star of Sakhalin, but Bakharev tells Anna that Dr. Kamsky is missing and pleads with her not to return to the infested oil rig. She refuses, telling Bakharev she will see him soon. They turn the ship back towards the Sakhalin but because the seas are so rough, they are unable to dock with the platform properly. As such, they head to the crow's nest and jump from the ship when it collides with the rig. Hansen makes the jump, but Anna falls into the sea.

Hansen at some point is parasitized by a prowling Exocel but was saved by Bakharev, but then Bakharev is dragged into an air duct by an Exo and killed. Hansen learns that Dr. Kamsky and Bakharev were under orders to make the Exos as dangerous as possible and succeeded, but without any way to control the resulting creatures. After succeeding in killing more Exos and more paranoidal mercs, Hansen reestablished contact with Bennett. Hansen is then told he must find Dr. Kamsky's laptop and transmit the Exo research. Meanwhile, Anna is rescued from the sea by a large creature and left in a lab, where she is parasitized by an Exocel. Seeing this taking place on a security monitor, Hansen races to the lab to give Anna the antidote... Getting himself parasitized second time by a prowling Exocel in the process.

He makes it to Anna in time and administers the antidote before the parasitic takeover can take hold. Fortunately Anna had knowledge in medical field, and she saved Hansen in return. Bennett then contacts him and Hansen makes him promise that if he gives Bennett the research, Bennett will save Anna. He soon discovers that Dr. Kamsky infected himself with a strain of Exo DNA. Hansen finds Dr. Kamsky's laptop and transmits the antidote data to Bennett, but nothing else. As a furious Bennett berates Hansen, he and Anna agree to blow up Star of Sakhalin using C4. As Hansen plants the charges, he learns Dr. Kamsky had gone completely insane;

The Truth and the Final Showdown

After infecting himself with Exo serum, Dr. Kamsky released the imprisoned Exos on Star of Sakhalin and planted a group of Exocels on the Eastern Spirit. He then went into hiding to await his metamorphosis to be completed. And apparently Dr. Kamsky is delighted with the realization that he now possesses immortality and power beyond his scientific senses and now wishes to do the same to Anna. When Hansen has planted all of the charges, he heads to the heliport to meet Anna. Before they can take off however, they are attacked by a fully mutated Dr. Kamsky; the same creature who rescued Anna from the sea. Dr. Kamsky is desperate for Anna to remain with him on the oil rig, but Hansen is able to fight him off and kill him(so much for immortality). He and Anna then escape in a helicopter as Star of Sakhalin explodes below them. 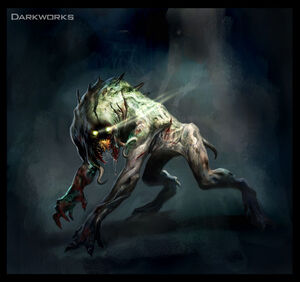 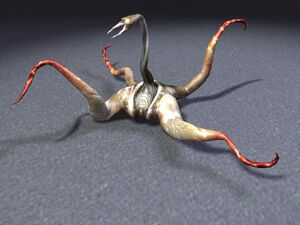 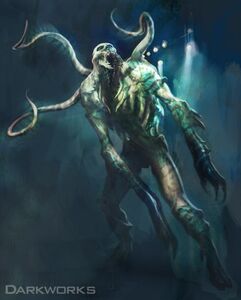 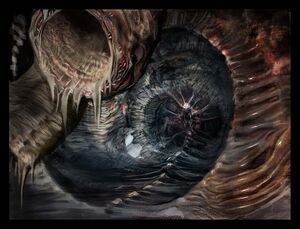 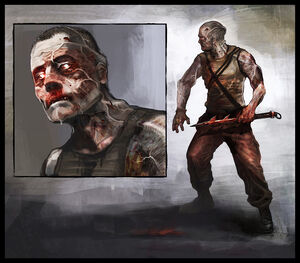 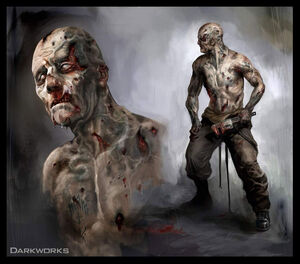 Exomutant A
Add a photo to this gallery
Retrieved from "https://villains.fandom.com/wiki/Exo-Type?oldid=3024724"
Community content is available under CC-BY-SA unless otherwise noted.