Kill as many demons and sinners as possible via annual purges.

Though they have not appeared in person yet, instead they are revealed in a flashback but are pivotal - since the entire plot of the Hazbin series revolves around their imminent return.

The Exorcists are a group of militant angels dressed in elaborate LED masks who are tasked with traveling into Hell every year and going on a bloody massacre, killing as many demons and sinners as they can before returning to Heaven and waiting for the next year to arrive so they can repeat the cycle over and over.

This is done to stop overpopulation in Hell as it is only via angelic weapons that demons and sinners can permanently die, the Exorcists greatly enjoy their role and are stated to be extremely sadistic creatures who take great pride in killing others.

While many accept the vicious cycle of death each year things change when Hell's resident princess, Charlie (daughter of none other than Lucifer himself), seeks an alternative to the annual purge in the form of the "Happy Hotel", a place she believes can redeem sinners and allow them to enter Heaven, thus solving Hell's overpopulation issues without resorting to erasing others.

While the Exorcists have not yet appeared in person, they are by far the greatest danger to the entire setting, their regular purges also cause angelic weaponry to be left behind - these weapons are used by demons and Overlords to erase their competition and thus even without direct conflict the Exorcists play a massive role in bringing lasting danger to Hell (it is unknown if they purposefully or accidentally leave their weapons, though, since they have been stated to be sadistic creatures who enjoy death, they likely deliberately leave these weapons for residents of Hell to find and thus cause more destruction).

One of the creator's writers (Dave Capdevielle) went into details during a live-cast on what happens when demons die in Hell, he stated they become completely trapped forever in a void of nothing and even their former friends and loved ones forget they exist - thus they literally become erased from even the afterlife.

This would make the fate of those that fall victim to the Exorcists' annual purges truly nightmarish even by the standards of the already dark setting.

The Exorcists have yet to officially appear, however, their technology has now made its first appearance, with Striker being the first antagonist in the series to have access to them - it is unknown how he obtained these weapons or how many he has. 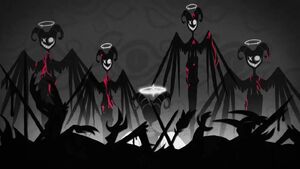 Add a photo to this gallery
Retrieved from "https://villains.fandom.com/wiki/Exorcists?oldid=4379265"
Community content is available under CC-BY-SA unless otherwise noted.