Wreaking havoc around the factory.
Assimilating with dead toys.

Assimilate with as many toys as possible (ongoing; currently succeeding).

Experiment-1006, better known as the Prototype, is the main antagonist of the 2021 indie horror game Poppy Playtime.

It is a mysterious mechanical entity created by Playtime CO. who goes on a rampage in killing everyone around the company after the results go terribly wrong. It was originally thought to be Huggy Wuggy, but Experiment-1006 is hinted to be far more dangerous.

The Prototype was created by Playtime CO. in the 1960s after Poppy. It was designed to be a living toy to entertain children, but sometime after its creation, it began rebelling against the company and actively showed violent tendencies. It eventually escaped and it is heavily implied that the experiment brutally murdered the scientists studying it.

Experiment-1006 is mentioned in the death screens, where the player is asked how they think of him.

The Prototype is mentioned in a VHS tape in the factory. In it, a scientist is explaining how 1006 is missing and directly responsible for the trouble happening in the factory, but explains that it will not harm the research. Screams and Huggy Wuggy's roar are heard in the background and the tape ends abruptly, implying that either Huggy Wuggy or the Prototype killed the scientist. As the tape plays, the Prototype's hand appears on the screen before the tape ends.

A Fly In A Web

Experiment-1006 is mentioned in a VHS once again. In it, it is described as being very intelligent, but also very destructive. It is even stated to have made a laser to disable the cameras and escape. This ended in the casualty of an employee.

At the end of the chapter, Mommy Long Legs begs the player not to kill her, fearing she'll join "him". After she dies, a large and skinny metal needle hand belonging to Experiment-1006 grabs her remains and drags them into the darkness.

A Trophy of the Prototype 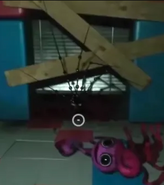 The Prototype dragging the head of Mommy Long Legs away 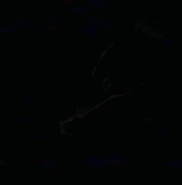 The Prototype seen in a tape in chapter 1