Eye-Bats are antagonists from the Disney animated television series Gravity Falls. While the smaller, Earth-native variants are passive and non-threatening, the larger, "Nightmare" varants are members of Bill Cipher's Henchmaniacs from the Nightmare Realm.

The small variant of Eye-Bats are native to planet Earth and are among the creatures found in Gravity Falls, Oregon. During Standford Pines' time in the town, he researched and documented them in Journal 3 as Creature #86, and even captured some and pinned them as well as kept them in jars. Eye-Bats make infrequent appearances in Gravity Falls.

Larger and more hostile variants of Eye-Bats are among the interdimensional criminals imprisoned in the Nightmare Realm with Bill Cipher and his other Henchmaniacs. After Bill opens the rift between the two worlds and brings forth Weirdmageddon, swarms of Eye-Bats emerge in Gravity Falls.

Bill tasks the Eye-Bats with spreading out and attacking the town by using their gorgon-like petrifying gaze to turn the residents to stone, then deliver the statues to him and build a throne out of the solidified townsfolk.

They also serve Bill as his scouts, searching the town for more potential victims and possible opposition to his plans. Bill plans for he and his Henchmaniacs to leave Gravity Falls and take over the world, then the universe. However, they are kept in by a barrier created by Gravity Falls' law of weirdness magnetism. As Bill tries to get Ford to tell him how to collapse the barrier, the heroes attack in the modified Mystery Shack robot Shacktron. Fellow Henchmaniac Paci-Fire sends a swarm to attack, though they are held off by the robot. One is eaten by a T-Rex, one is blasted by Rumble McSkirmish, and another has its gaze turned against it and is shattered by Wendy Corduroy. The heroes use the Shacktron to infiltrate Bill's castle.

After Bill is defeated, the rift sucks all of the Henchmaniacs, including most of the Eye-Bats, back to the Nightmare Realm. Some are left behind, but are shooed out of town by Sprott.

The small Eye-Bats appear as small eyeballs with yellow irises and black, bat-like wings protruding from either side. The large Eye-Bats are the same, but much bigger and with red and black wings. 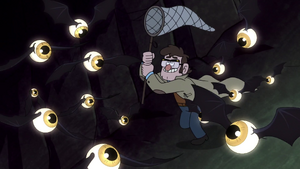 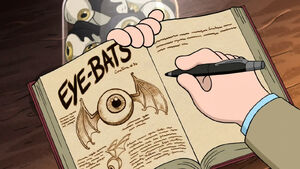 The Eye-Bats' entry in Journal 3. 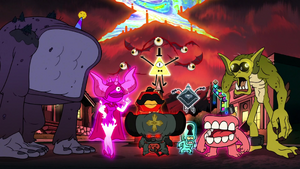 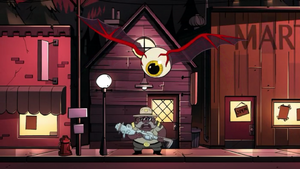 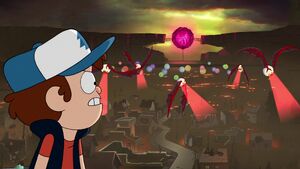 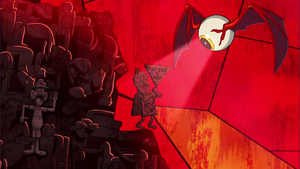 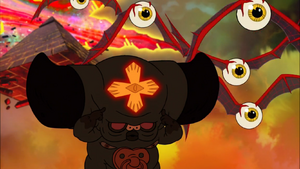 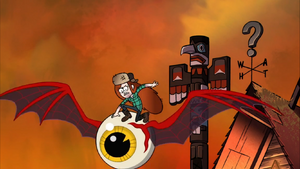 Retrieved from "https://villains.fandom.com/wiki/Eye-Bats?oldid=3301054"
Community content is available under CC-BY-SA unless otherwise noted.