Beating up people to get to "his" Eyeholes.

Ensure that no one steals his Eyeholes.

Eyehole Man is a costumed alien in spandex with a megaphone who beats up anyone brave or stupid enough to be caught with the alien cereal Eyeholes. He is a minor antagonist in the Rick & Morty episode "Interdimensional Cable 2: Tempting Fate".

He was voiced by the series' creator Justin Roiland, who also voiced numerous other characters on the show including Rick Sanchez and Evil Morty.

Eyehole Man is sly, ruthless, manipulative, and psychotic. He is an obsessive, treacherous, uncaring, cruel and arrogant individual who only cares about himself and his Eyeholes. He has demonstrated that he will use violence to get his cereal back and has vandalized many places in the process.

Eyehole Man is a blue-skinned alien and he is slightly below average height. He wears a white shirt and pants with purple spandex. He has two white eyes with black pupils. Eyehole Man has the Eyehole logo on his shirt, wears blue gloves and boots with white stripes on them, and a light green belt buckle with a diagonal line on it that is above his spandex. He also wears a purple mask that covers his eyes and has a purple cape tied to his neck.

Eyehole Man makes his first appearance on a commercial during the beginning the of the episode. During the commercial, two aliens are confessing their love for each other because they both have Eyeholes (which is from Eyehole Man's cereal). They make out via the Eyeholes while Eyehole Man is above their house in a helicopter. He bursts in the house by gliding down a rope through the ceiling window.

Eyehole Man then yells through a megaphone that he brought with him at the two saying that he is the Eyehole Man and that he is the only one allowed to have Eyeholes. He then proceeds to kick both of them in the face knocking out all of their eyeholes. Eyehole Man then tells them to get out of here, which they do although clumsily due to having no eyes left. The commercial then ends with an announcer advertising Eyeholes and telling the watchers to get them today. It is also shown they are available in corporations on Earth.

While the commercial still went on, Rick warns Morty that he has to be careful and if Eyehole Man catches you with his Eyeholes, he will burst through your window and then start kicking the shit out of you. However, Rick then says that the risk is worth it because the Eyeholes melt in your mouth while consuming them and that they are delicious. Beth then shows up and says that she cannot believe Rick is explaining about alien cereal while Jerry is in the hospital (the reason why they are there in the first place). Rick replies back telling Beth that she was 39 years too late but was then unsure and tells Beth or however old he is and asked Beth if Jerry is 50 years old. Rick then acted surprised and asks Beth again if Jerry is really 50 years old (implying that he does not care about Jerry).

Eyehole Man made an appearance during the post-credits scene of the episode. Jerry is in the kitchen and opened up Rick's cupboard only to discover an Eyehole box. Jerry is intrigued and takes the box and starts eating an eyehole. Unbeknownst to him Eyehole man is flying above Jerry's house by the same helicopter (though heard off-screen). Eyehole Man then bursts through Jerry's window and assaults Jerry and says through his megaphone that he is the Eyehole Man and tells Jerry to give him his Eyeholes. As Summer Smith and Morty try to get the Eyehole Man off Jerry, Rick scolds him for going through his cupboard while Morty asked why there even was a box of Eyeholes. 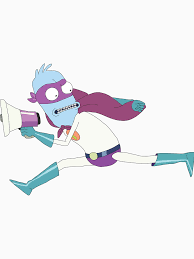 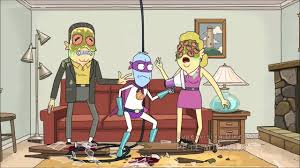 The Eyehole Man breaking into a house. 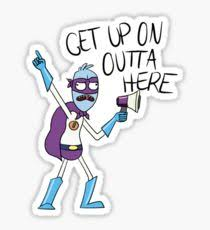 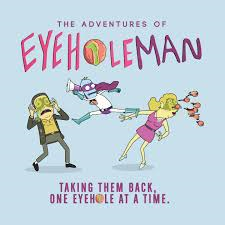 The Eyehole Man in action.
Add a photo to this gallery 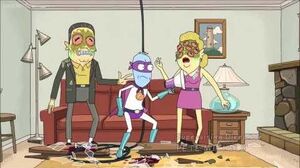 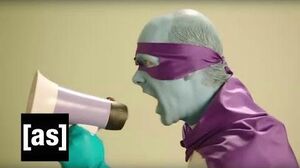 Retrieved from "https://villains.fandom.com/wiki/Eyehole_Man?oldid=3907293"
Community content is available under CC-BY-SA unless otherwise noted.