Mastery of the Death Staff/War Ace

Attacking anyone who is too loud for them to hear.

Eliminate as many warriors as they can for Nevar.

The Eyeless Demons are 2 villains from the BBC TV show Raven. They serve as the bad guys in their eponymous challenge (a.k.a. "The Eyeless Demons"), where the contestants (warriors) have to make their way from one end of their courtyard to the other, without getting hit by the Demons and their weapons.

Despite being blind or very near that stage, the Eyeless Demons more than make up for this, with their superior hearing, thus making them a force to be reckoned with.

Since they can't claim a warrior through the same means like other Demons (i.e. merely by touching the warrior(s) if they fail their challenge, break a rule, come into contact with them or otherwise), they rely on their Death Staffs/War Axes to do the job.

They guard a treasured ring at the end of their courtyard and will attack anyone who is too noisy with the chimes on the poles provided to unhook the ring. In Series 4 however, they also stand guard over rings with bells attached to the poles in that series had no bells to start with.

In the first season, the two warriors participating in each heat are given a prayer chimes stick by the Raven. He then instructs them to follow their assigned rope (which they can't step over; if they do, they'll lose a life), without making their chimes sound. If they do, they'll wake up the Demons, who'll then move towards them, randomly poking around with their Death Staffs.

In the second season, it followed the same format as season 1, except the Demons' weapons were changed to their War Axes (which merited a change in the map symbol for their challenge, see below in the gallery). The new weapons also gave a new elimination effect; the axe head would turn blue and spit white lightning at the unlucky warrior, who would disappear in a white glow (in the previous season, the Death Staffs would have lightning flash down their length, turn the area around the warrior negative, and then they'd disappear).

This season also showed that the Demons had a long chain attached to one of their ankles, with the other end attached to a shackle on the floor.

In the fourth season, the Eyeless Demons challenge was radically overhauled; for example, the Demons can't move their feet, so are confined to a single spot where they stand, therefore having to swing their axes around whenever they're awakened. And the warriors' sticks no longer have chimes on them. Moreover, the course was radically shortened, so the two competing warriors were confined to being within the two wooden borders. In another departure, there were more rings to this challenge, for each warrior: two rings for each warrior in front of the first Demon, one ring each in front of the second Demon and a final ring, on a golden skull, on the far end of the courtyard.

However, the skulls on which the rings except the final ring have bells attached to them, rather than the hooking sticks. If a warrior makes the bells ring, the Demons will wake up and swing their axes around, which the warriors must avoid touching if they want the final ring. If they touch the Demons or their axes, they're eliminated, so will lose a life but will keep any rings they got in this challenge; the same goes if they don't get the final ring on the golden skull. 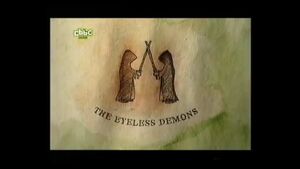 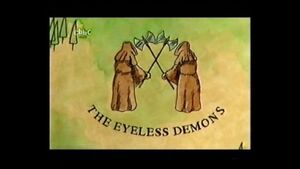 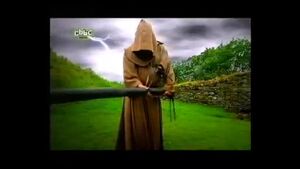 Retrieved from "https://villains.fandom.com/wiki/Eyeless_Demons?oldid=3893439"
Community content is available under CC-BY-SA unless otherwise noted.