Eyeless Jack is the titular main antagonist of the Creepypasta of the same name. He is an enigmatic stalker and killer who breaks into the protagonists' home to torment and steal from them.

Eyeless Jack is usually described as a person in a black hoodie and an expressionless blue mask with no nose or mouth. Black liquid, supposedly blood, is dripping from the eye sockets behind the mask. His fingers are sharpened into claws, and his mouth filled with sharp teeth.

Eyeless Jack is infamous for being able to successfully remove a victim's kidney while they are asleep and sew up the wound flawlessly, so it is apparent that he has anatomical and perhaps even medical knowledge. He also possesses tremendous stealth and is almost never caught in the act. Despite having no eyes, Jack can still see. He is incredibly strong, being able to maul Mitch before easily killing his brother. The full extent of Jack’s power is still a unknown.

On June 7, 2010, the photograph of Eyeless Jack was posted on 4chan, by a user named Arnon. The title of the post was Nightmare Fuel, which contained images of disturbing creatures from video games, one of the images featuring the original photo of Jack. The story itself was written on February 25, 2012, by a Wikia user Azelf5000, also known on YouTube as Papa Pinche. On November 21, 2014, the story was officially terminated from Creepypasta, because the writer requested it to be taken down for thinking that since Jeff the Killer was removed, Eyeless Jack should be removed by him before the admins decided what happened to it.

The Origin of Eyeless Jack

While the story itself is non-canon, the most popular origin story of Eyeless Jack is from the creator of Sally Williams, La Mishi Mishi. Jack Nichols was just like any other average college student. His only real friend was his peer and roommate, Greg. Eventually, he found a sort of friendship with another peer, Jenny, and a small group of her friends. Jack later on discovered that the group turns out to be a cult worshiping a demon named Chernabog, with Jack involuntary made a sacrifice to be a son of Chernabog. Jenny and her friends proceed to blind Jack by pouring a hot, tar-like substance into his eyes. After he is reborn as a cambion, a half-demon, and he butchers Jenny and the others with a scalpel; ripping off their masks, slashing their throats, and disemboweling them. He took their kidneys afterward presumably as a sort of prize, or the fact that it was in some way related to the cult.

In the original story, a man named Mitch moves in with his brother Edwin after his house is foreclosed. A week later, Mitch wakes up with a large gash on his cheek. After going to the hospital, the doctor reveals that Mitch's left kidney had been surgically removed overnight. Around midnight that night, Mitch wakes to see Eyeless Jack over his bed, wearing a blue mask with black liquid dripping from empty eye sockets behind the mask. Mitch manages to grab his camera and take a picture before Jack attacks, clawing at his chest. Mitch escapes and flees into the woods, where he trips and is knocked unconscious.

When Mitch awakens in the hospital, it is revealed to him that Edwin had been killed the previous night. His parents drive him to the house to collect his belongings. When he enters, Mitch sees Edwin's corpse and a small object lying next to it. He observes it find that it is his kidney with a bite taken out of it, covered in a black substance. 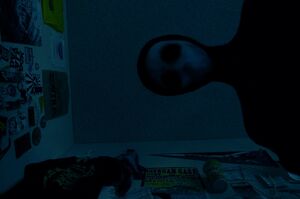 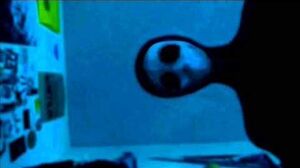 Eyeless Jack. By Azelf5000
The original story told by the official writer. 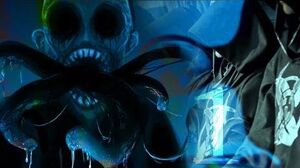 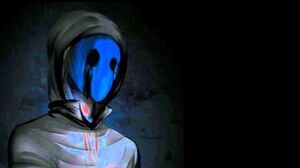 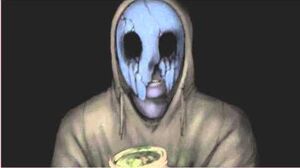 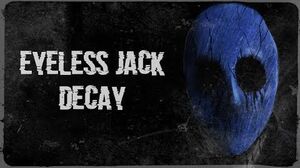