The Real Adventures of Jonny Quest

Memories of his family.

Avenge his family and bring judgement on the "wicked" (failed).

Ezekiel Rage is one of the main recurring antagonists in The Real Adventures of Johnny Quest, Cartoon Network's 1990s reimagining of Hanna-Barbera's 1960s Johnny Quest series.

His goal is to destroy the world out of revenge for what he considers the murder of his wife and daughter.

He was voiced by Michael Bell and David Ackroyd.

Ezekiel Rage was an agent of the United States government with the code name "Raven". At sometime in his life he met and married a woman named Abby and they had a daughter called Karla. However he kept the secret of his occupation from them and said he was a salesman in computers.

His real name was possibly Argus Grimm. Issue nine of the Dark Horse series states that he was recruited from Stanford University in 1974, and paired with Race Bannon on several missions.

Sometime during the Reagan administration, he was on an assignment in Paniagua, where he was discovered by Paniaguan soldiers, and fled with his wife and daughter by car. The United States declined to help him escape, fearing that intervening in his escape would result in war with Paniagua, and he crashed the car off a cliff, surviving with serious burns all over his body; his family was not so lucky.

Bent on revenge against the government and a world perceived corrupt, he took on the name Ezekiel Rage and the costume of a Dia de los Muertos celebrator, complete with skeletal arm attachment and wide-brimmed hat. He also kept a family album called the Book of Rage as his only possession.

He used a combination of religious faith and old intelligence contacts and information to amass power for his apocalyptic plans.

His first scheme was locating a nerve gas and nuclear waste storage facility in New Mexico, intending to use the nerve gas on American citizens. He abducted Dr. Hugo Smallwood after the doctor investigated his appearances, believing him to be a bat creature. The Quests arrived to visit Smallwood and uncovered the plot. Rage tied them up, believing Jessie Bannon to be his daughter, Karla. Jonny and Jessie fought with him above ground as he prepared a plane. He took off with the two on board, but they escaped with the lone parachute, while the plane with Rage still on board crashed into a canyon wall, presumably killing him (​Ezekiel Rage​).

Rage survived, and one of his scientists discovered the Pentium molecule and its substitute, which could destroy the earth's atmosphere. Rage had his followers take over mission control at NASA and boarded a shuttle mission with Dr. Benton Quest and Hadji Singh on board. He hijacked the shuttle and, at an abandoned space station, began manufacturing the molecular substitute, hoping to drop it into the atmosphere from space. Race Bannon and Natasha Rostova arrived and stopped him; the space station crashed into the ocean, but Rage survived once again (Rage's Burning Wheel​).

He observed the test explosion of the nuclear device Big Baby One, and led a team to capture Big Baby Two, another thermonuclear device. He had several copies made and set up at a base at the north pole to go off in tandem, which would melt the polar ice caps. The Quests discovered his plan, and Jessie, using the power of the Aurora Borealis to appear as his daughter Karla, caused a distraction sufficient for a governmental strike team and Dr. Quest to disable the nukes, but Rage escaped swearing revenge (Future Rage).

Rage hid for some time before following through with his next plan. He first created a gathering place in the Himalayas, then secured a thermonuclear triple warhead; lastly, he seemingly acquired a mechanical right hand. He accosted a 2-mile deep exploration at Meteor Valley State Park, using the deep tunnel to lower the warhead into the earth. He set the timer at seven days and then evacuated to the Himalayan meeting place, announcing to the White House seven days later that the earth would soon end. Dr. Quest and Race scrambled to try and fix the problem, and Dr. Quest granted Johnny access to his time travel program, code named Rachel. Johnny and Jessie went seven days back to stop Rage from lowering the bomb into the earth's crust. Rage drove the bomb into the time portal and struggled with Johnny and Jessie; he then accidentally drove the bomb through a time portal leading to prehistory. It detonated, killing him and completing a casual loop (The Edge of Yesterday).

Rage started off as a friendly and caring man, until the government he worked for refused to help him which led to the death of his wife and daughter. This tragedy made him lose his sanity with bitterness, a great hatred towards the world and a lack of trust in people. He is insane when it comes to his schemes to end the world and as he sees it "Bring judgement on the wicked". He allows no one to stand in his way. His only weakness is the hallucinations he has of his daughter, which he mistook Jessie Bannon for twice that led to him undoing his plans and turning against his own men. 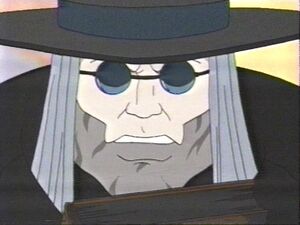 Rage holding his most cherished possession "The Book of Rage". 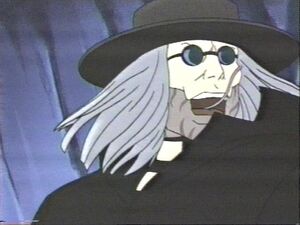 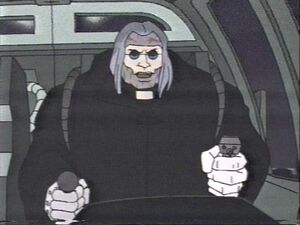 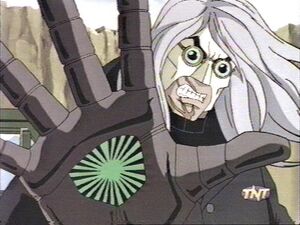 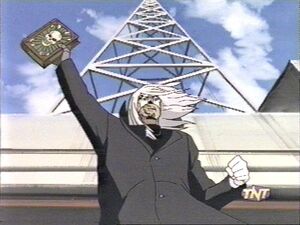