Superhuman abilities derived from bio-upgrades
Has a considerable fortune

Building bioweaponry and manufacturing next-generation weapons for terrorists and supervillains.

Destroy Iron Man and anyone else that gets in his way (ongoing).

Ezekiel "Zeke" Stane is a supervillain in the Marvel Comics universe, the son of Obadiah Stane, and an arch-enemy of Iron Man. He served as the main antagonist of the Order and the nightmare arcs.

Zeke Stane is the son of Obadiah Stane who was revealed to be the behind-the-scenes manipulator pulling the strings of other villains, including Black Dahlias, Maul and M.A.N. from S.H.A.D.O.W. Androids, who have set out to destroy The Order. The Order being Tony Stark's showcase Initiative team of California, Zeke targets them as the first part of his revenge on Tony Stark for the death of his father Obadiah Stane.

In the final issue of The Order, #10, Stane meets Iron Man face-to-face for the first time ever. Due to Stane's life off the grid, Iron Man fails to realize who he actually is. Despite Stark's resources as Director of S.H.I.E.L.D., Stane leaves California and prepares for the next stage in his vendetta against Stark.

Fraction would follow The Order with a new monthly on-going Invincible Iron Man title, with Zeke Stane appearing in its first story arc "The Five Nightmares" to further his vendetta against Tony Stark. Zeke is first seen attending a meeting with the Board of Directors of a big tobacco company who had hired him to tweak their tobacco to produce a higher basal metabolic rate in the people that smoked it. Stane says he succeeded in doing it, but reveals he only took the job to use the tobacco company’s money to create bio-upgrades for himself, upgrading his own hypothalamus to utilize energy within the body which Stane swiftly uses to execute the board of directors with energy blasts from his finger tips. Stane is later updated by his girlfriend/assistant Sasha Hammer on his upgraded African suicide bombers who were the test subjects of Stane's biotechnology. The attacks from Stane's suicide bombers were something neither Iron Man nor War Machine could've predicted. Stane meets Stark a second time (with Stane saying his name to Stark) during a party moments before suicide bombers appeared and self-destructed. Stark was able to summon his Iron Man armor while Stane just stood there with a disturbing smile. The explosion also severely injured Pepper Potts in the process.

Stane ultimately confronts Stark with his own unique armor, while also using terrorists armed with his technology to attack sites around the world. However, Stark defeats Stane's plan with his control of all of his various Iron Man armors, allowing him to be in multiple locations and eliminate virtually all of Stane's bombs at once. Stark then disables both of their armors with a massive electromagnetic pulse and defeats the younger man in hand-to-hand combat. Stark delivers the final emotional blow to the defeated Stane by telling him "that his father was better than him and harder to defeat", leaving Zeke speechless. However, Stark is left disturbed by Stane's attack, particularly with the notion of what he may have to become in order to face the future Stane represents.

Zeke Stane had been visited a few times in his prison sentence and was "paroled" by the Mandarin, Sasha's father, to now employ Zeke with Tony Stark being informed after the fact. Later, Zeke used a photo of the Iron Man armor in short cut at the Daily Bugle and make it look like the hero was drunk. Also, Zeke planned along with Mandarin to use classic villains of the Armored Avenger against him, such as Chemistro, Living Laser and Mauler.

Mandarin became increasingly discontent when Stane could not build Dreadnoughts and Titanomechs on impossible schedules and nonexistent budgets. He started affecting Stane with his ring, making him obsessed with the work. Irked by this, Stane managed to remove his bomb implant and face off against Mandarin. However, Mandarin cranked up the ring's effect, making Stane his slave, causing increasing brain damage in the process. After the Mandarin succeeded in bringing Stark under his control, Tony and Zeke worked together to produce the Titanomechs.

After Mandarin used 3 of his rings to power the first Titanomech, Tony started a plan with Zeke where they convinced super villains Whirlwind, Blizzard II and Living Laser to join him in a rebellion with the final purpose of defeating Mandarin, and managed to use the technology in his body to help Resilient to find him, using microbots known as the Swarm, which tracked the repulsor technology of Tony's body. Resilient asked for help to the Triumph Division and the Dynasty to help Tony defeat Mandarin and his Titanomech. After Tim Cababa managed to reactivate the Extremis virus inside Stark's body, Tony created a link with the Swarm, and use them as bombs to destroy Mandarin's weapons, who in the end was killed by Stane.

As part of the All-New, All-Different Marvel, Zeke Stane represented Stane International when he attended a meeting at the Universal Bank with Tiberius Stone of Alchemax, Wilson Fisk of Fisk Industries, Sebastian Shaw of Shaw Industries, Darren Cross of Cross Technological Enterprises, Shingen Harada of the Yashida Corporation, Frr'dox of Shi'ar Solutions Consolidated, and Wilhelmina Kensington of Kilgore Arms where they discussed with Dario Agger about his and Roxxon Energy Corporation's plans to exploit the Ten Realms of Asgard. Zeke Stane also saw the arrival of Exterminatrix of the Midas Foundation who knocked out Dario and declared herself a new member of their assembly.

He is also revealed to be the financial backer of a rebellion against T'Challa in Wakanda.

Ezekiel Stane with other supervillains 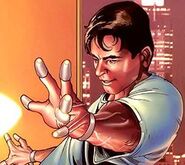