The next day, while Ren and Komon were talking about light, suddenly a beast suddenly appeared in the same city as his previous battle, codenamed Ezmael by Illustrator.Ren hesitates with the decision to fight to save the world or go to the hospital to get Raphael's medicine to cure his illness. For his final decision, Ren finally decided to fight and turned into Ultraman.

The two ended up fighting but since Ezmael had all the power of the previous Space Beast, Ezmael easily defeated Nexus. Night Raider finally comes to save Nexus, but all of them are defeated, Nexus fights again and eventually faints due to Ren's helpless condition. Illustrator finally contacts Ren via telepathy to believe in light. Moments later, when Ezmael was destroying the city, Nexus got up and when Ezmael released his energy Nexus jumped and defeated Ezmael with Over Arrow-Ray Schtrom, the attack finally succeeded in defeating Ezmael and Ren completing his last day as Ultraman.

However, after Ezmael is defeated, Night Raider member Mitsuhiko Ishibori reveals himself to be the mastermind of all the events. 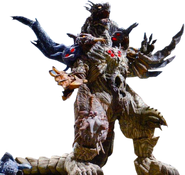