Admiral of the Gaia Sanction Fleet

Abusing and manipulating his brother.

Destroy Captain Harlock and his crew.

Achieve a high position in the sanction.
Kill Yama for ruining his life (all failed).

Ezra is the secondary antagonist of the 2013 Japanese 3D CGI anime sci-fi film Space Pirate Captain Harlock. He is the older brother of Logan and the military secretary for the Gaia Sanction. He was crippled in an accident years ago and believe his actions are for the greater good.

Ezra has shown to be cynical, arrogant and very abusive towards his brother, Logan and blames him for many unfortunate in their lives. He's willing to take advantage of his own brother's seek of redemption and use him as his pawn to sent him as a mole just to achieve his own goals.

Ezra was born and grown up in the Gaia Sanction colony, spending most of his childhood with his brother and Nami. During his adult years, he rises through the ranks in the Gaia Sanction military and earning many honors. One day, Logan became angry after his mother's favorite flower dies, he accidentally destroys the whole greenhouse and caused to paralyzed Ezra and put Nami on life support. After the incident, Ezra told Logan that he has to do everything he says to earn his redemption and later married to Nami in order to provide her treatment that she needs.

Ezra sends Logan to infiltrate Arcadia as a recruit and reported him back about what he has learned from them. After learning Harlock's intentions of heading to Earth, the Gaia Sanction permitted Ezra to use the Kaleido Star System to stop the Arcadia. While Harlock uses a hologram to disguise his movements, Ezra spots him and takes the 2nd Fleet and the superweapon to stop the space pirate. Seemingly destroyed the Arcadia, it revealed to be another hologram. The real Arcadia reveals itself and destroys the 2nd Fleet and rams into Ezra's flagship.

While on Earth, Ezra revealed the true origins and intentions of Harlock to Logan, who was shocked and returned to the Gaia Sanction to fight against Harlock. With the Arcadia crew is imprisoned, Ezra confronts Nami about her love for informing her love for his brother. This caused Nami to release Ezra's hatred and anger within himself and realized that Ezra's source of his torment wasn't Logan but her. After learning Nami loved Logan, Ezra becomes furious and pulls the plug to her life support pod. As Nami was dying, she admits that she lies to Ezra and always loved Logan.

Later, Ezra lies to Logan that Nami used a compromised system to record a hologram message for him and caused her life support pod to malfunction and gives him the message. While Logan doesn't believe him, Ezra has the guards hold him down and play the message, causing the younger sibling to drop to the floor. Haunted by his childhood friend's death, Logan returned to Earth and finds a sign that life can still thrive there and discovers a meadow of white flowers.

During the battle, Ezra realized that if the Arcadia gets too close to Earth, the planet would be destroyed and decided to ram the Arcadia to the Oceanus ship and pushing it away from Earth, causing both of them to have many casualties.

Once Logan confronted Ezra on the Oceanus' bridge, both fought and Ezra shot at Logan's face, causing to lose his right eye and have a similar scar much like Harlock. As Ezra prepares to kill Logan, he is shot in the back by Harlock and is mortally wounded. Ezra uses his last breath to warn them about the Jovian Blaster and Harlock mentions that Ezra was the only one who remained faithful to Earth. As Logan carries his brother to the Arcadia, Ezra tells him he saved the Earth because he had the flowers that were loved by Nami and their mother. After looking at the flower, Ezra dies in his brother's arm as the ship crash-landed on Earth. 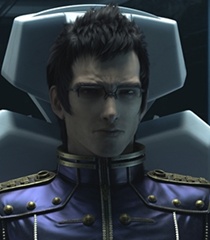 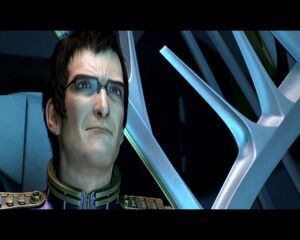 Ezra's villainous breakdown.
Add a photo to this gallery
Retrieved from "https://villains.fandom.com/wiki/Ezra?oldid=3578493"
Community content is available under CC-BY-SA unless otherwise noted.