Brainwashing the Elves into following him.

Fëanor is a central character in the novel The Silmarillion. He was one of the First born Elves and a person proud and vengeful who ended up due to fanaticism, committing a genocide against his relatives the Teleri Elves.

Fëanor was tall and dark-haired, quite typical of the Noldor. He was charismatic, but also cruel.

Fëanor was the son of Finwë, the High King of the Noldor Elves, and his first wife Míriel Serindë. He was named Curufinwë by his father and Fëanáro (meaning "spirit of fire") by his mother. Fëanor's birth was painful for Míriel to the point where she wished to die. Indeed, she lay down to die in the Gardens of Lorien and her spirit departed from her body.

Finwë felt guilty about the loss of his wife and decided to remarry. He married again, this time to Indis, a golden-haired Vanya Elf. Together the couple had four children: Findis, Fingolfin, Irimë, and Finarfin, the last of whom would become the father of the Lord of the Rings character Galadriel. Fëanor hated his stepmother and her children, and dwelt away from them.

In his youth Fëanor wedded Nerdanel, the daughter of the Elven craftsman Mahtan. They would have seven sons: Maedhros, Maglor, Celegorm, Caranthir, Curufin, Amrod, and Amras. Nerdanel was of a peaceful nature and sought to contain Fëanor's pride - which worked for a time.

The Shibboleth of Fëanor

Fëanor would also be known for the Shibboleth of Fëanor. Fëanor opposed the change in the Quenya language - namely the gradual replacement of the archaic letter þ with the letter s. Fëanor's mother Míriel spoke in the archaic form of Quenya, styling herself Þerindë, and Fëanor became attached to the older letter. Nevertheless, his father and stepmother favored the newer letter. Fëanor saw the disappearance of þ as insulting to Míriel and as a plot to weaken his influence among the Noldor.

Fëanor was quite gifted. He improved the pre-established work on the Tengwar script, and was the most talented smith of all the Elves. His most prized work was three jewels known as the Silmarils, which were created with the light of Telperion and Laurelin, the Two Trees of Valinor. Such great energy was taken into creating the Silmarils that Fëanor realized that he could not create anything like them ever again. Fëanor grew suspicious that the Valar and other Eldar would desire the jewels. He alternated between proudly displaying the Silmarils with great ostentation and hiding them from all except his immediate family.

It is said that Fëanor was inspired by the hair of his niece Galadriel. Fëanor begged Galadriel to give him some of her hair, but she refused.

The evil Vala Melkor coveted the Silmarils, and he deceived the Valar and the Eldar into thinking that he had repented his evil ways. Melkor would then take advantage of Fëanor's pride by telling him that his half-brother Fingolfin was planning to usurp his place as the heir of Finwë and seize the Silmarils for himself. Fëanor believed Melkor's lie and grew so hostile that he threatened Fingolfin with his sword.

As punishment for his actions, the Valar exiled Fëanor to Formenos. Fëanor took the Silmarils with him. Finwë decided to leave his wife Indis and their children and go into exile with Fëanor.

Melkor disappeared for a while, but later showed up at Formenos. It was here that Fëanor realized that Melkor wanted to steal the Silmarils. Melkor left in a fit of rage after being denied the Silmarils, and turned south.

The Darkening of Valinor

The Valar sought to reconcile Fëanor and Fingolfin. Fëanor was invited to Valinor to make peace with Fingolfin, who had become King of the Noldor. The two reconciled for that moment, and the problem seemed to have been resolved.

But things would take a turn for the worse when Melkor arrived with the great spider Ungoliant. The two destroyed the Two Trees of Valinor, and then proceeded to attack Formenos. Melkor slew Finwë and confiscated all of the gems, including the Silmarils. Melkor and Ungoliant escaped into Beleriand.

The Valar realized that the Silmarils contained the only remnant of light of the Two Trees. The Vala Yavanna asked Fëanor to give up the Silmarils, but he refused, stating that the Valar would be no better than Melkor. But then a messenger told of the raid at Formenos and the rape of the Silmarils.

The Valar now knew that Melkor had not repented. Fëanor proceeded to call Melkor "Morgoth", the Black Enemy. Now King of the Noldor, Fëanor delivered the most impassioned speech ever given in Arda, which he unwittingly filled with Morgoth's taint. He railed against the Dark Lord, but because of Morgoth's influence, he also blamed the Valar for Morgoth's deeds. He persuaded most his people that because the Valar had abandoned them, the Noldor must follow him to Middle-earth and fight the Dark Lord. Fëanor then swore the terrible Oath of Fëanor which all seven of his sons also proclaimed, vowing to fight anyone and everyone—whether Elf, Man, Maia, or Vala—who withheld the Silmarils, and invoking even Iluvatar as a witness. This Oath led to much conflict and later caused great tragedy among his seven sons.

Fëanor then turned to Alqualondë, home of the Teleri Elves, and demanded that they let him use their ships..The Teleri refused. Fëanor then ordered the Noldor to take the ships. The Noldor brutally crushed the Teleri, and Fëanor took the ships.

Fëanor's youngest brother Finarfin, who was married to Eärwen of the Teleri, repented and turned back, where he became King of the Noldor in Valinor. His four children would stay with Fëanor.

Fëanor, his seven sons, and his grandson Celebrimbor (the son of Curufin) sailed on the ships of the Teleri and landed in Beleriand. Fëanor torched the ships, but his son Amras was burned alive in the process. Fëanor's wife Nerdanel had forewarned that one of her twin sons would die in the process. The remaining Noldor had no choice but to cross the Helcaraxë in the far north of Arda.

After Morgoth learned of Fëanor's arrival, Morgoth sent a force out of Angband and attacked Fëanor's encampment. The Noldor fought off the army of Morgoth, but Fëanor decided to storm Angband with his sons. Before he could enter the fortress, a group of Balrogs attacked. Fëanor was mortally wounded by Gothmog, the Lord of the Balrogs. The dying Fëanor cursed Angband three times before he passed on. After his death, his fiery spirit consumed his body. His spirit departed to the Halls of Mandos.

His sons were still bound by the Oath to recover the Silmarils, which would determine the events of Middle-earth during the First Age. 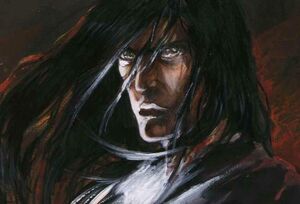