Sending out Mongers to fight Sun Vulcan or carry out missions for Black Magma.

Obtain Japan's cache of geothermal energy and use it to power Black Magma's arsenal.

Eliminate Sun Vulcan and conquer the world.
Get revenge on Queen Hedrian and Inazuma Ginga for causing his death (succeeded).

Führer Hell Saturn is the leader of Machine Empire Black Magma and the main antagonist of Taiyo Sentai Sun Vulcan. He directs the forces of Black Magma from his base in the North Pole, Iron Claw Castle, and oversees the development of Dark Q spies and Black Magma's Monger Army.

Aside from spreading chaos and destruction throughout the world, Hell Saturn also occasionally has his forces track down hidden treasures to fund Black Magma's goals. He was later revealed to be a minion of the Omnipotent God, the deity of the Black Magma cult.

He is voiced by Shōzō Iizuka.

A projection of Führer Hell Saturn appeared at a United Nations conference after several planes from the UN Guardians of World Peace were shot down at the North Pole by Black Magma's forces. Hell Saturn revealed the existence of Black Magma and went to announce their plans for world domination. In response to the global threat that Black Magma posed, the United Nations approved an initiative by the Guardians of World Peace to form a team of three called "Sun Vulcan" to combat Black Magma. Hell Saturn immediately set about crushing Sun Vulcan after it was formed, sending his agents to eliminate each of the three recruits.

After Sun Vulcan thwarted several of Black Magma's schemes, Hell Saturn recovered the frozen body of Queen Hedrian and revived her by placing a mechanical heart in her chest, believing that her magical powers could assist Black Magma in their goals. To keep her from rebelling against Black Magma, Hell Saturn kept a device with him that could shut down her heart at any point. Black Magma's forces were later bolstered again when Amazon Killer, a Vader Clan field officer from space, arrived on Earth to assist Queen Hedrian.

Hell Saturn later recruited Inazuma Ginga, a bounty hunter from outer space, to be a member of Black Magma. However, Hell Saturn and Inazuma got into a fight over Hell Saturn's tampering with Inazuma's Monger partner, Fighter Monger. Hell Saturn ended up being killed by Inazuma, revealing him to be a mecha-human. After his death, Queen Hedrian usurped control of Black Magma, though apparitions of him wandered throughout Black Magma's base. He later appeared to Queen Hedrian and explained that he was revived by energy beams of the Omnipotent God. He then made her artificial heart rust, inducing cardiac arrest and killing her.

Hell Saturn later reappears in the final episode alongside a revived Hedrian and Amazon Killer when Sun Vulcan go to confront the Omnipotent God. The three all disappeared when Chief Arashiyama struck and killed the Omnipotent God. 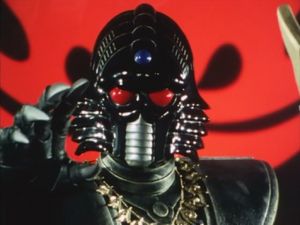 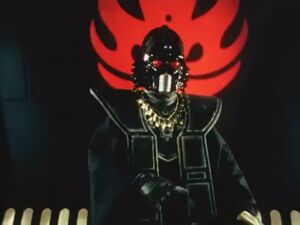