F.A.N.G is an antagonist and one of Shadaloo's Four Heavenly Kings, which appears for the first time as the secondary antagonist in Street Fighter V.

When he was a child, he was trained to control the ways of the Poison Hand by a cartel of assassins known as Nguuhao in order to use this ability as a weapon. He also forced to be exposed along with other children with poison in controlled environments as part of his training to master this technique. F.A.N.G grew up watching children all around him die over the course of his training, but these events made him stronger and he became the strongest user of the Poison Hand, dubbed "the Fang of the Nguuhao", and later becoming the new leader of the Nguuhao. Alongside four other assassins who helped each other survive the unforgiving conditions they were put under, they began making progress into the Asian underworld as professional assassins, making their mark on it.

With time, he became famous enough to be sent on a mission to assassinate M. Bison with the help of other Nguuhao assassins. However, he was defeated, with the other assassins being killed by Bison. The latter revealed that he is immune to their poison and continued to fight with F.A.N.G.

After the fight, F.A.N.G. surrenders, and Bison spares his life after the former offered to join Shadaloo. Bison accepted under the condition that F.A.N.G proves himself to be of use. Afterwards, F.A.N.G worked his way up Shadaloo's ranks, becoming one of Shadaloo's Four Heavenly Kings, replacing Sagat, as second in command and a notable factor in Bison's Operation C.H.A.I.N.S.

At first glance, F.A.N.G can come across as a rather comedic villain, but the crimes that he's committed may make him even worse than M. Bison. He has completely melted people with his venom, and even went as far as to scrape up the remains of a victim to lick it off his hand for pleasure. He even threatened a child that he'll do the same to them if they don't cooperate with his demands. His clan also kidnaps children.

It should be noted however, F.A.N.G was more ruthless and dangerous prior to induction into Shadaloo. Along with originally bearing little to no emotion due to his profession and upbringing, he was also colder and calculating, willing to maintain distance and safety by killing off anyone that attempted to garner friendship and camaraderie with him, and admired the feeling of being feared greater than respect. It is said that his time in Shadaloo eventually developed him emotionally and loosened his demeanor, though ruthlessness from his upbringing still remain. On the other hand, this also lets him display his sadism more openly. He makes it clear that he cares about no one but himself; tormenting his men and serving M. Bison only out of fear. The only moment that makes him somewhat sympathetic is when he mourns Bison's death. Even then, he likely only did so out of respect and not because he cared for him.

Overall, F.A.N.G while comical, commits crimes that contradict his less serious side. He is nothing more than a heartless monster who loves being feared more than respected. Even Bison isn't as outspoken regarding his sadism. 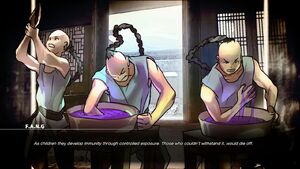