19XX: The War Against Destiny

Harassing Mark Raratto and George Hamill on every stage they encounter

Related to Hero
The F. Blacker (in Japanese: 高々度亜音速戦斗機 F・ブラッカー Takadaka-do A onsoku sentō-ki F burakkā Ultra-High Altitude Subsonic Fighter F. Blacker) and its unnamed pilot serve as the main antagonist of the Capcom video game 19XX: The War Against Destiny. The pilot of this aircraft is not only the main character Mark Raratto's older brother (a fact that Mark is blissfully unaware of), but he is also the final boss of the game as well, fighting for the evil Outer Limits organization. Mark Raratto and his friend George Hamill (portrayed by the second player) fight against this pilot in several sections of the game, usually as a mini boss, similar to the Mysterious Pilot from Giga Wing, another shoot-'em-up by Capcom.

The F. Blacker is a medium-sized subsonic fighter plane with a distinctive black coloring that gives it its name. It has a pair of turboprop engines that are enhanced by a special high-output supercharger, which allows the pilot to operate at altitudes up to 15,000 meters. The aircraft also featured a pair of variable geometry "swing-wings", much like the real-life Grumman F-14 Tomcat fighter aircraft. When the swing-wings fold back, that is when the plane speeds off. The F. Blacker is armed to the teeth, boasting a pair of machine guns in the nose and hardpoints on the wings for missiles, but its most distinctive weapon; a three-barreled multi-launcher weapon behind the cockpit canopy that could fire a variety of munitions, especially powerful air-to-air missiles.

The F. Blacker could also be docked with a massive, flying wing-type weapons platform called the "Black Noise". It is powered by six gigantic jet engines, and is armed with machine gun turrets, four-barreled revolving cannons, and homing missile launchers at the front. Each revolving cannon could retract its barrels and deploy a larger one that fires a deadly spray of dangerous projectiles. When the wings are destroyed, the central module would jettison. It is capable of ultra-high-altitude flight, and is armed with two homing missile launchers, omnidirectional machine cannon turrets that deploy and retract, and its deadliest weapon; the "Maelstrom Laser", a deadly, tornado-like beam of energy that sucks in targets while destroying them. The F. Blacker could also use its multi-launcher while docked to this deadly support unit. 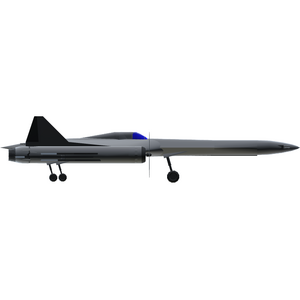 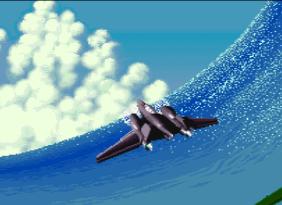 F. Blacker in the attract mode
Add a photo to this gallery

Retrieved from "https://villains.fandom.com/wiki/F._Blacker?oldid=3921419"
Community content is available under CC-BY-SA unless otherwise noted.