Stormtrooper of the First Order

Fighting for the First Order.

Restore the former Galactic Empire.
Kill Finn for his betrayal (all failed).

He was portrayed by Liang Yang and voiced by David Acord.

FN-2199 was one of several Stormtroopers under the direct command of Captain Phasma, being trained along with FN-2187 and FN-2003 from birth. He and fellow stormtrooper FN-2003 were initially close friends with FN-2187, but their friendship became strained when it became clear that FN-2187 was hesitant to follow orders, starting at the First Order's suppression of the Miner's Strike at Pressly's Tumble, during which FN-2187 could not bring himself to open fire on the unarmed striking miners (FN-2199 initially hesitated but eventually obeyed his orders to kill the miners). They were sent to Takodana on the planet Jakku to retrieve a map to Luke Skywalker from the village elder, Lor San Tekka, and defeated the lightly armed villagers defending their homes. After the battle Kylo Ren ordered that the entire village be massacred, which order FN-2199 obeyed without question, but which FN-2187 did not. Shortly afterwards FN-2187 defected from the First Order, which FN-2199 saw as a betrayal.

When Han Solo takes FN-2187, renamed "Finn", and Rey to Maz Kanata's castle on Takodana to look for more clues to where Luke Skywalker was located, the First Order tracked them down and a massive battle ensued. In the battle, a huge army of Stormtroopers disembarked and attacked the Rebels.

Immediately after Finn killed a Stormtrooper with the Skywalker lightsaber, FN-2199 appeared and called his former comrade a traitor before brandishing his Z6 riot control baton and fighting Finn in melee combat. He deflected all of Finn's attacks and gained the upper hand in their fight, but was shot and killed by Han Solo before he could deliver the killing blow. 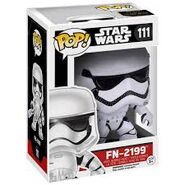