Foreign Organization for World Larceny (originally under the command of Dr. Nogood)

Expertise and resources in many areas from robotics to the occult

Secure the world by conquering it and ruling it with iron fist, under their full control.

Destroy Duck family/Clan McDuck to prevent them from making chaos by adventuring (both failed).

FOWL was created by Dr. Nogood, but after his demise, it was led by the High Command.

The organization is the biggest revived headache of SHUSH and Darkwing Duck has several of its agents in his rogue gallery for either his intended target or agents he helped arresting.

A flashback in 1960s London during a "From the Confidential Case Files of Agent 22!". A younger Beakley is Agent 22 of the S.H.U.S.H. agency and assigned to a case to retrieve a page from the Book of Castle Dunwyn before the chemist-turned-F.O.W.L. agent Black Heron does. But since the page is being auctioned at an exclusive high-class event, Director Ludwig Von Drake assigns Beakley with freelance operative Scrooge to attend it. Director Von Drake gives Scrooge an Action Cane P.P.K. equipped with spy gadgets, with Scrooge accidentally activating the knock-out gas feature.

In order to help Scrooge, Beakley unbinds her wrists, drank the juice, and escaped to find the missing page nearby. After memorizing the formula, Beakley tore it up. Heron attempted to attack her, but the scuffle mixed several chemicals together and started a fire that costed Heron her arm. Scrooge and Beakley escaped, and Beakley decided to stick with Scrooge.

FOWL was first mentioned by Scrooge McDuck during "The Shadow War!".

F.O.W.L.'s leadership lies in the hands of the shadowy High Command, a trinity whose identities are carefully kept secret. They run the organization mercilessly in regards to any victims of their schemes as well as their mind control own agents if their boasts and paycheck outdo their deeds universe.

To Get the Treasure

Meanwhile, a small mosquito that was bothering Donald throughout the episode, turns out to be a mechanical one that is being used by the organization F.O.W.L. to spy on the family and universe.

Underneath the Funzone, F.O.W.L. is keeping a close eye on the Duck family with Black Heron and Steelbeak plotting to take them out. Black Heron plans to use an intelligence ray on Scrooge so that he can be dumber, having tested the opposite effect on a couple of chipmunks and two mice to make them smarter.

Meanwhile, Bradford Buzzard brings Steelbeak and a returned to normal Black Heron back to his base. He angrily berates the two for their failure and tells them that he wants no more rays and that they will have to attack Scrooge with more cunning than usual.

FOWL to get Phantom Blot to destroy Scrooge and Family and the universe.

He is confronted by Bradford Buzzard of F.O.W.L. who is upset over Taurus's over the top use for the Ramrod as he wants to keep things discreet with the McDuck family. Taurus captures him and has him imprisoned as well and orders the villains to make themselves known in the city.

After escaping Bushroot, they find the Ramrod and discover where Scrooge is. At this point, the triplets deduce that Bradford is working with F.O.W.L., but he tosses the three into the same dimension as Scrooge.

Bradford escapes thanks to Black Heron, but everyone spots that he is in a F.O.W.L. helicopter with Scrooge realizing that his greatest enemy has returned.

Meet the F.O.W.L. and the agent Brainwashing

With F.O.W.L. at their heels, Scrooge tests out the Money Bin’s new security system on Louie and Della, while Beakley and Webby train the others for an enemy.

Somewhere in the shadows, a man

Brainwashing with the Agents 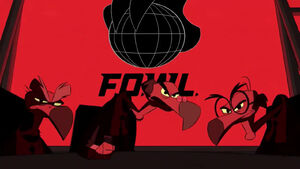 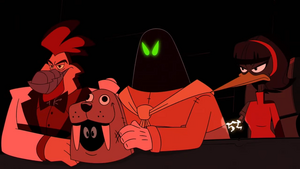 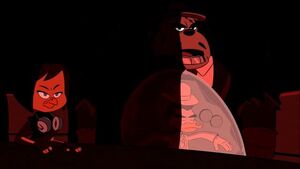 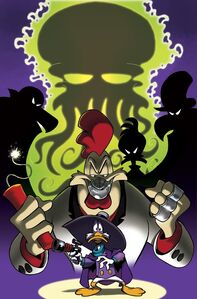 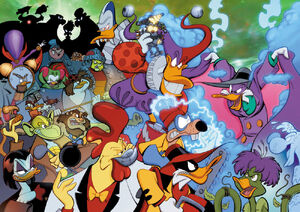 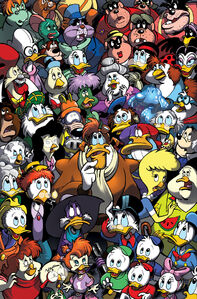