Prince of the Baptiste system

Leader of the Galactic Superhero Corps

Jess Baptiste VI, better known as FU, is one of the two main antagonists (alongside Damon Riccitiello) and the penultimate boss of No More Heroes III.

He was voiced by Noshir Dalal in English.

FU is a very sadistic person, getting glee out of murdering Badman in front of Travis Touchdown as well as ripping off Shinobu's arms. He is quick to anger, often killing innocent people or ordering the deaths of innocent people casually, examples of this include when he killed the President of the United States, ordering Velvet Chair Girl to destroy a city filled with people, killing the members of Damon Riccitiello's board room because he viewed them as unimportant and throwing back the nukes that a foreign country launched at him, destroying a city in the process.

FU cares little about his own allies too while in various flashbacks, we see FU having genuine heart-to-heart conversations with the other members of the Galactic Superhero Corps, however, as shown by how he murdered Sonic Juice and Paradox Bandit, it is unknown if he simply changed or if he was never sincere with them in the first place.

Twenty years before the start of No More Heroes III, FU crashed onto Earth and was found by his future best friend Damon Riccitiello. He was protected by him and in exchange, FU granted Damon some powers. The two set about working on FU's spaceship so he could return home, when they were done, FU flew off but not before confirming to Damon that he'd return to Earth in twenty years.

True to his word, FU returned to Earth in order to meet Damon again, however, FU had seemingly changed. Sometime in those 20 years, FU had destroyed another planet, causing him to be sent to the Black Hole Prison, he escaped and formed the Galactic Superhero Corps with the nine other prisoners he escaped with.

Once Travis kills Mr. Black Hole, FU begins the announcement of his invasion on an international TV broadcast from the President of the United States' office. He sets out the rules that if FU is killed then the Earth will be saved, and if not, then he'll conquer Earth.

Soon FU shows up at Travis' motel for a fight, Shinobu manages to cut his head in half with a sneak attack, however, it does nothing. FU then slams Shinobu repeatedly before ripping both her arms off before quickly kicking Travis aside. He then gets attacked by Badman who he lifts up by the head and crushes his skull in order to make him and Travis even since he killed Mr. Black Hole. He then leaves, taunting Travis all the while.

Eventually, FU becomes tired of waiting for Travis and murders Paradox Bandit and Sonic Juice so he can fight Travis faster.

FU and Travis come face to face again on top of Damon Tower. Travis starts to aggravate FU, mocking him for being a spoilt prince. The two fight with Travis emerging as the winner with help from Shinobu, Bad Girl, NT Kamui and Notorius.

After the fight, Shinobu manages to decapitate FU, with his head turning into the form he had when FU met Damon twenty years ago. He flees to his spaceship in order to return back to his home planet, however, Damon planted a bomb on his ship, blowing him up and killing FU for good.

FU appears as one of the many spirits found in Super Smash Bros. Ultimate, with him first appearing as a spirit in a No More Heroes III-themed spirit event as an ace-level support-type spirit that gives the user stronger attacks and faster movement speed if they don't take any damage. In his spirit battle, the player must fight against a Mewtwo on Final Destination, with the Mewtwo starting the battle with a Black Hole and Ghirahim and Deoxys being summoned once the Mewtwo takes enough damage. 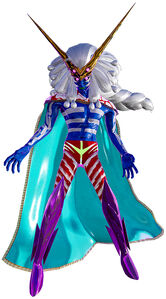 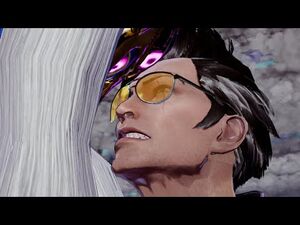