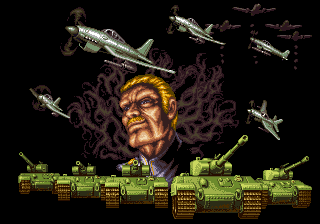 The unnamed leader of Country F is the main villain of Ghost Pilots.

In the final years of World War II, rumors started spreading about recently discovered huge natural resources in Country F, which could turn the tide of the war. Country F soon became the target of Country C and Country D, who started fighting each other over control of Country F's resources. Two pilots of the Ghost Pilots squad are sent to intervene in the conflict and defend Country F from invasion.

Unknown to everyone, both C and D countries were being manipulated by a Nazi general, who used their conflict as a distraction to march his own troops into F Country and successfully take it over. After both C and D countries are defeated, the Ghost Pilots are sent to face the powerful forces of the F Country leader. Despite his military might, he ends defeated and is declared dead after his huge tank is destroyed by the Ghost Pilots.

Retrieved from "https://villains.fandom.com/wiki/F_Country_Leader?oldid=3437385"
Community content is available under CC-BY-SA unless otherwise noted.