Weapon-Dealing Terrorist
Fabian Fuchs is a minor antagonist in Hitman: Contracts, and the main antagonist in the mission The Bjarkhov Bomb.

He was one of the infamous Fuchs terrorist brothers, alongside Frantz Fuchs and Fritz Fuchs, and chronologically the first one to be killed by Agent 47. He is 47's another genetic uncle (since he is Frantz Fuchs's brother).

Much of the past of Fabian was unknown. In the past, he was sent by his brothers to make a deal with former Red Army officer Sergei Bjarkhov at his Siberian bomb production facility in order to purchase some of his bombs.

Howevr, 47 was sent to kill them both. After killing Fabian, 47 disguised as him and killed Bjarkhov in the deal, before destroying Sergei's bomb production capabilities by using explosives to sink the submarine which was used as a production facility.

Fabian's death occured before the deaths of his brothers, which happened some years later. After being attacked in Paris by Albert Fournier and his men, the injured 47 had some flashbacks of several past targets he had eliminated, with Fabian was among them. 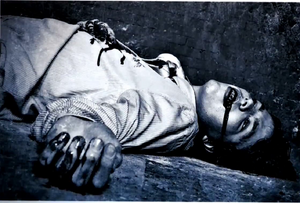 Fabian's corpse in Hitman: Absolution, depcited on Diana's file.
Add a photo to this gallery

Retrieved from "https://villains.fandom.com/wiki/Fabian_Fuchs?oldid=4207941"
Community content is available under CC-BY-SA unless otherwise noted.