Creation of the Scientist

Extracting souls from the living via inserted Talisman

To kill all lifeforms (succeeded).

Extract all the stitchpunks' souls from their bodies to perfect itself (failed).

The Binary Reactive Artificially Intelligent Neurocircuit, also known as B.R.A.I.N. and better known as the Fabrication Machine, is the main antagonist of the 2009 computer-animated film 9.

It is a soulless artificial intelligence created by the Scientist before the stitchpunks, which went insane and initiated an omnicide against all life. It is responsible for the eradication of humanity, and it seeks to drain all the stitchpunks' souls and then repopulate the lifeless world with machines.

Lacking a soul to withstand corruption, and being forced to make armies of Steel Behemoths beyond its limit, the Fabrication Machine was driven insane and turned against the Nation, and initiated a war and genocide against humanity and all other lifeforms. The Machine had its Steel Behemoths attack and wipe out all humans, and manufactured a poisonous gas which eventually killed off all life on Earth. At some point during or after the war between humanity and the machines, the Fabrication Machine had somehow been shut down, and left deactivated in the intact ruin of the Nation's weapons factory, and all of its war machines had likewise perished, except for one which sought to find the Talisman and reactivate the Fabrication Machine.

Sometime after the machines' war against life had sterilized the Earth, the Cat Beast finally found the Talisman and returned to the weapons factory with it, but was destroyed by 7 just before it could reactivate its dormant master. However, 9, out of curiosity, accidentally inserted the Talisman into the B.R.A.I.N.'s external hard drive, reactivating it and causing the B.R.A.I.N. to, through the Talisman, absorb 2's soul in the process. After 9, 7 and 5 escaped, the Fabrication Machine reactivated the factory and began producing hunter and killer machines again, with the intent of capturing the eight remaining stitchpunks and absorbing their souls through the Talisman (as the Machine's constraints limited its movement to the factory, and thus it needed to make other machines and robots to do its dirty work and bring the stitchpunks to it).

The original look of the Machine was a very decorated and beautiful sphere that had a single, glowing red eye in the middle. It had an external hard drive just below its eye, through which it could be connected to the Talisman. It also had two small arms protruding from the sides and many vibrating power chargers all over. The Machine's two original arms were removed when it was taken away by the Chancellor.

After taking it away, the Chancellor had the Fabrication Machine's original spherical form inserted into the head casing of a giant mechanical body-frame anchored to the weapons factory which resembled a mix between a spider and an octopus. The Machine's new body had nine new arms - some of which were equipped with a unique construction tool each, including a buzzsaw, a blowtorch and a soldering gun - as well as two separate gargantuan grasping arms extending from the mechanical body frame's end on the factory ceiling. The Fabrication Machine's casing's head was also covered by metal layer dotted with electrodes, that released electrical frequency waves whenever the Machine expressed focus or emotion.

Having been ensouled with the Scientist's intellect alone and not his actual soul, the Fabrication Machine was extremely intelligent, ingenious, cunning, masterful, manipulative and resourceful, but also insane, obsessed, temperamental and omnicidal due to lacking a human soul to resist corruption or tell right from wrong. Apparently, the Fabrication Machine was very destructive, vengeful and hateful towards humanity due to the stress and pressure it had been put through by its human masters driving it mad. The Machine showed itself to be dangerously and world-threateningly obsessed; both with destroying and extinguishing all remnants of humanity along with all other lifeforms on Earth as revenge for the Machine's own tormented fate, and with capturing and absorbing the souls of all of the stitchpunks (the latter is thought to be either so the Machine can survive and sustain itself by using the souls as a power source, or an envious and futile attempt by the Machine to have a soul for itself).

Because of its soullessness, the Machine is capable of being remorseless and confident towards its acts of murder and omnicide, and it is shown to treat the dead skeletons of humanity as nothing more than tools for its machines. Though it was evil, soulless, and psychopathic, the Fabrication Machine was apparently still capable of having its actions driven by at least some human emotions; such as anger, pain, revenge, fear, hatred, and sentimentality. Also, before it was corrupted and driven insane, the Machine did at one point display a loving side towards the Scientist as its father.

The Fabrication Machine has a wide range of abilities and weaponry used for destroying the stitchpunks, which are actually construction tools to create machines. These include multiple claw-like arms, some of which in turn have inbuilt tools such as a flamethrowers and buzzsaw. Thanks to its immense intelligence and many inbuilt tools, the Fabrication Machine is able to very quickly create many hunter and killer machines, either from supplied factory parts or even from scrap, bones and rubble. When the Talisman is inserted into the Fabrication Machine's external hard drive, the Machine can use it to extract and absorb the stitchpunks' souls; by projecting three green energy beams from the Talisman into the target stitchpunk's face, which forcefully rip out and absorb the stitchpunk's soul and leave its deceased body. 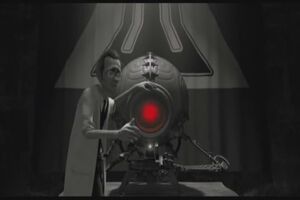 The newborn Fabrication Machine in the past, about to be taken away. 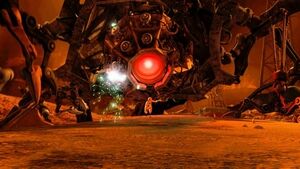 The Machine about to kill 5.

The Machine chasing after the remaining stichpunks. 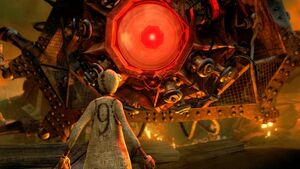 The Fabrication Machine about to attempt to absorb 9's soul. 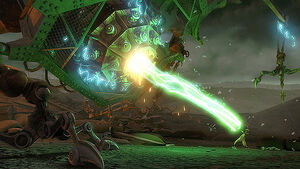 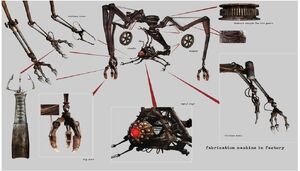 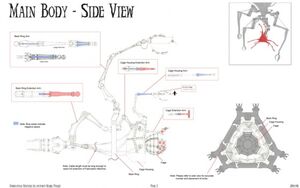 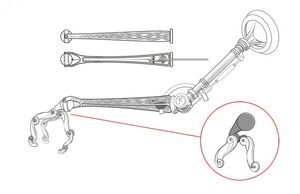 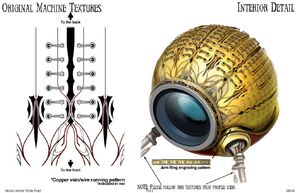 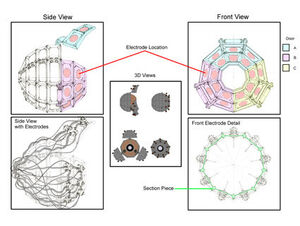 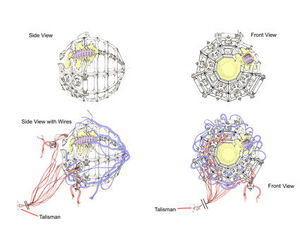 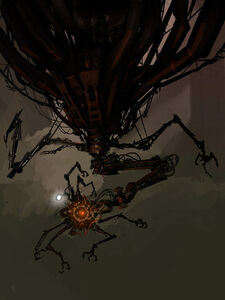 Retrieved from "https://villains.fandom.com/wiki/Fabrication_Machine?oldid=3488077"
Community content is available under CC-BY-SA unless otherwise noted.