Terrorizing anything he came across

Kill any that stray in his path

Murderous Goblin
Fachan was a frightening, malformed and extremely violent fairy, goblin or lesser demon from Scottish folklore and mythology, often seen as a solitary member of the ogre sub-class of small giant humanoids.

While all fairies were seen as capricious and dangerous beings in folklore the Fachan was particularly malignant and was said to absolutely loath all other life.

Thus the Fachan's lair was noticable for being devoid of any and all life, the vicious creature having murdered any other life in the nearby area - this included animals and other fairies, if given the chance.

Lukily for humans Fachan was a deformed and awkward beast who had only one leg and arm by which to travel, often carried a large club or other weapon - a single cyclops-like eye glared out of a goblin-esque face and due to these strange features the monster could be dodged or outran, if victims were not quick or agile enough Fachan would not hesitate to brutally beat them to death with his weapons, driven purely out of hatred.

Fachan was said to be extremely strong despite his awkwardness and could lay waste to entire farms in a single day - he was said to be so hideous that he could cause heart-attacks or madness in humans who gazed upon his frightful form.

His half-formed body is similar to the Fomor of Irish mythology (a race of monstrous giants banished to the sea by the Irish gods and known for their deformities) as well as several figures in Arabic mythology such as the Shikk and the Nesnas, continuing an ancient trend to associate deformity and ugliness with evil.

While mostly seen as a purely mythical creature there have been reported sightings of Fachan or similar beings, though most of these have been seen as hoaxes - nevertheless this has seen Fachan added to some lists of humanid cryptids even in the modern age, despite his original status as a monster of folklore. 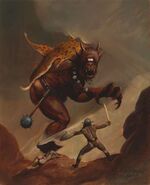 Add a photo to this gallery
Retrieved from "https://villains.fandom.com/wiki/Fachan?oldid=3484901"
Community content is available under CC-BY-SA unless otherwise noted.