Aid Facilier in his goals (failed).

Shadowy Minion
Facilier's Shadow is a major antagonist of the 2009 Disney film The Princess and the Frog, which is based on the 2002 children's novel The Frog Princess by E.D. Baker and the German fairytale The Frog Prince by the Brothers Grimm.

As the mysterious shadow of Dr. Facilier, it is completely loyal to him, and serves as his inner darkness. Despite being somewhat one of Facilier's "Friends on the Other Side", it has no association with them, and especially fears the fate it and Facilier will face if he fails to pay back his debt. 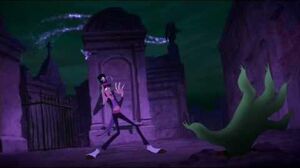 Friends on the Other Side (Reprise) - Princess and the Frog