War of the Birds

Killing and eating others for both food and pleasure.

Become the master of the forest.

Kill Olivia and Oliver (all failed).

Fagin is the main antagonist of the 1990 Danish animated fantasy film War of the Birds.

Fagin was extremely sadistic and cruel in life, taking great pleasure in going into the forest to find any birds or other small animals to eat, to some degree, he could probably be considered a cannibal. Because of this, most birds are so terrified of him that they don't even try to fight against him and rather just let him do his thing, even turning on Oliver and Olivia when they try to rally more birds against him after their first attempt to take him down fails. He is also incredibly manipulative, for he kept a mentally traumatized dove around to inform him of what is going on and would manipulate her into complying with his actions, seemingly unaware of her cryptically warnings to others of when he's coming.

In a forest near a city, a community of birds lives in peace free of predators, with the exception of Fagin, the self-entitled "king of the birds" who every several days invades the forest in search of his next meal. One sparrow attempts to fight off Fagin to protect his nest, but is no match and quickly killed and eaten. His mate shares the same fate, and their nest is pushed down onto a lower branch of the tree, saving only one of the eggs, which Betty the bluebird adopts and names Oliver upon hatching.

During a conversation with Betty's partner, an owl named Walter, he mentions Fagin when Oliver asks if he'll grow up to be an owl and Walter reveals that Fagin killed Oliver's biological parents and that he says he's "king of the birds" (in control of the forest in the original version). Infuriated, Oliver declares that Fagin isn't his king and that when he gets older, he'll get back at him for what he did.

Following Oliver's introduction to another sparrow named Olivia and two mice brothers, Fredrick and Ingolf, all of whom share Oliver's goal to fight Fagin and avenge their parents, Fagin appears and corners Oliver and Olivia into a can, but he is chased off by the dog of a birdwatcher.

The following day, the Dove reveals to Fagin that Oliver and Olivia are trying to gather a following to help them fight against him and about the trap they are building. A displeased Fagin boasts that no matter how many birds they collect, they will not defeat him. The Dove asks him to at least spare killing them because Betty once saved her life, but Fagin tells her that she is only living to be his spy and reminds her that since he's "king of the birds", he'll have to make Oliver go if he's trying to rally up the others against him. The Dove says she wants to resign from the whole scheme, but Fagin says he didn't hear her and cuts her with his talon in the process. He then flies off to kill the children.

As the Dove flies to Betty to warn her of the children being in danger, Fagin finds the children, taunting them for defying his rule as the king of the forest. A vengeful Oliver stands up and declares he will be the next king and calls out Fagin for killing his parents. Fagin dismisses his claims and attacks Olivia and the mice hiding inside the trap. Oliver attempts to protect the others but is quickly slapped aside by Fagin, knocking him unconscious. Before Fagin can kill him, Betty arrives and slashes Fagin's right eye, leaving him half-blind. Fagin then chases Betty into storm clouds and kills her.

As winter arrives, Fagin returns to get revenge on Oliver and friends for his eye. He spots the children and Armstrong in an abandoned area and chases them once again. Oliver attempts to lead Fagin into a burning hut that Ingolf set ablaze using matches. After failing to grab Oliver, Fagin grabs Olivia instead, only for Oliver to peck at Fagin's remaining eye, causing him to drop Olivia and instead grab Oliver. The Dove, who was watching from a distance after trying to warn the two about Fagin's return (and was unable to because they didn't trust her after finding out she was acting as a spy), flies after Fagin and grabs him by the wings, trying to pull him into the fire. Oliver falls out of Fagin's grasp during the struggle and straight into the fire, but he is rescued by Fredrick. Fagin cripples the Dove's wing in an attempt to get her off him, but he realizes too late that his wing is on fire and both birds plummet into the fire and perish, ridding the threat of Fagin for good. 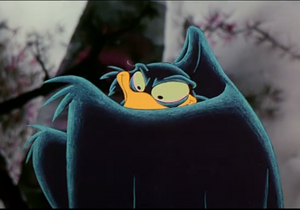 Fagin before losing his right eye. 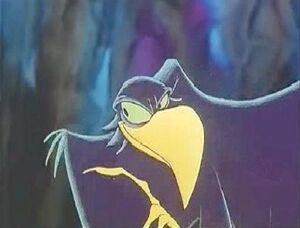 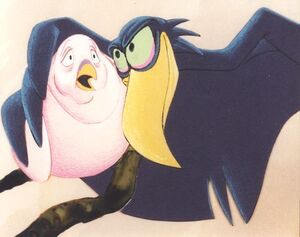 Fagin and his dove slave. 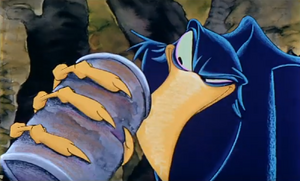 Fagin looking at Oliver and Oliva hiding in a can. 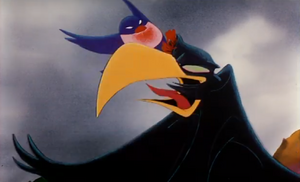 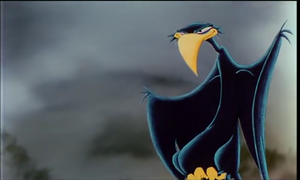 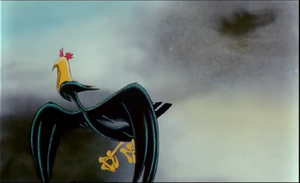 Fagin hunting at the climax of the film. 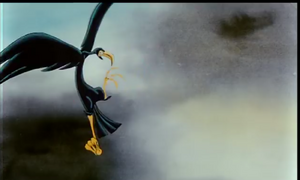 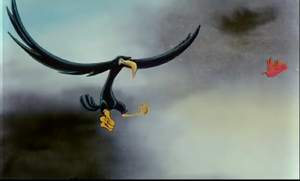 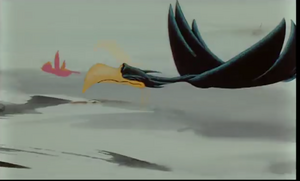 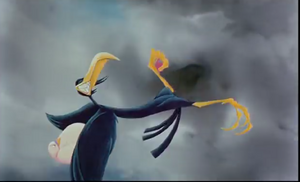 Fagin's dove slave turning on him after all of the abuse, leading into his defeat. 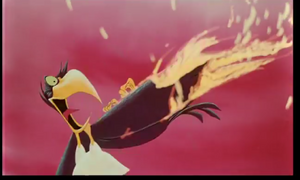 Fagin's well-deserved demise while burning with the fire.

Retrieved from "https://villains.fandom.com/wiki/Fagin_(War_of_the_Birds)?oldid=4320128"
Community content is available under CC-BY-SA unless otherwise noted.