Fai Suan is one of the eleven main antagonists in Kung Fu Panda: Tales of Po. He appears in the game's first chapter level "The Tale of the Mystically Awesome Coin".

Fai Suan was the adviser of the Emperor. However, he yearned to possess his ruler's mystical green coin, which was said to hold the power to change one's fate. He eventually steals it and flies to a remote area, leaving a dangerous path behind him. The Emperor enlists the Dragon Warrior's help in regaining possession of the coin, and he triumphantly succeeded in tracking down Fai Suan after having a battle through a forest teeming with a desperate group of greedy bandits. After a brief battle, Fai Suan was defeated and the coin regained. However, he escaped. Later, Po absentmindedly spends the coin on dumplings when a cloaked figure unexpectedly passed by with a dumpling cart. He did not realize that the vendor was actually Fai Suan in disguise. His present whereabouts are unknown.

Despite having the cunning that usually befits the emperor's adviser, Fai Suan is very wicked, ruthless and manipulative. In the game, Po describes him as creepy and mysterious. He is also fond for garlic, which gives him halitosis that comes of great use in battle.

Fai Suan is capable of using the kind of mystical energy to fight, including the ability to use teleportation and breathe fire. The fire resembles a purple smoke, that he was known to belch after eating garlic. It may also be identical, and he eats garlic to succeed in achieving these magical powers, which would explain why he periodically stops to eat some. The moves that he uses involve summoning a purple fire.

Fai Suan had full trust in the Emperor for a little while before stealing the Mystic Coin from the Emperor. Afterwards, the Emperor had Fai Suan put in prison for a treacherous action before Fai Suan escapes.

When they meet, Fai Suan had a strong dislike for Po in and during their fight. Before he was eventually put in prison by the Emperor, he was defeated.

Fai Suan wears a long blue robe with silver metal pads on his shoulders and around his torso, and a purple garlic clove belt on which he carries his supply of dumplings. He also appears to wear gold earrings. He also wears a black hat. He also wears a gray hood in his disguise as a dumpling vendor. 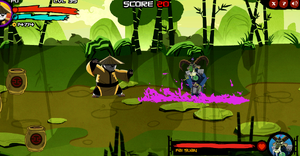 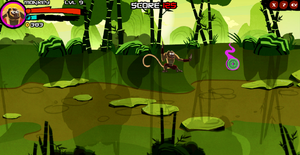 Monkey after defeating Fai Suan.
Add a photo to this gallery

Retrieved from "https://villains.fandom.com/wiki/Fai_Suan?oldid=3702161"
Community content is available under CC-BY-SA unless otherwise noted.