Have Shrek break up with Fiona or kill him (failed).

Force Fiona to marry her son Prince Charming to make him king, so she can become all-powerful over Far Far Away (failed).
Prove Ogres don't live happily ever after (failed).

The Fairy Godmother is the main antagonist of DreamWorks' 8th full-length animated feature film Shrek 2 and a posthumous antagonist of Shrek the Third. She is a magical fairy and the mother of Prince Charming.

When Charming complains that Fiona is not warming up to him, Harold wants to call the whole thing off, declaring that you can't force someone to fall in love. Undeterred, the Fairy Godmother gives Harold the love potion she was working on earlier and orders him to have Fiona drink some of it, saying it will make her fall in love with the first man she kisses, and to make sure it is Charming. At first, Harold refuses, but Fairy Godmother then blackmails him by reminding him that she helped him with his happily ever after and that she can take it away just as easily, making Harold give in. Then when Charming calls her his mother, they hear Donkey shout "Mother?!" and look outside to see him with Shrek and Puss, the three of them having heard the whole plan. Realizing the jig is up, the Fairy Godmother calls the trio "Thieves" and has them arrested and imprisoned while she and Charming attend a royal ball.

She then notices Fiona is not going for Charming (who's still under the impression he's Shrek) because of his behavior. She then declares to dedicate a song to Fiona and "Prince Shrek" and sings Holding Out for A Hero, causing Fiona and Charming to dance. The plan almost works until Donkey, Puss and The real Shrek arrive, having been rescued by Shrek's fairy tale friends. They fight over her over the Fairy Godmother's wand. Fairy Godmother quickly orders her son to kiss Fiona telling him she's already taken the potion, but when Charming kisses Fiona, She head-butts him, revealing Harold didn't give Fiona the potion after all. Charming manages to recover and then grabs his mother's wand out of Puss's paw and throws it to her. Enraged, the Fairy Godmother turns to Shrek and Fiona, exclaiming a final message directed at Shrek, "I told you ogres don't live happily ever after!" She then unleashes an energy bolt from her wand, as soon as the ray is about to hit Shrek. King Harold jumps in the way, and then the spell reflects off the amour he is wearing, and hits the Fairy Godmother. At first she seems unharmed, but as she prepares to attack again, she sudenly bursts into nothing but bubbles and sparkles, leaving only her glasses and her wand, which dims out along with her life. 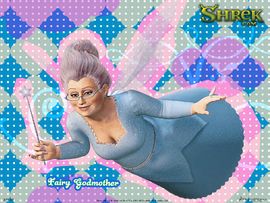 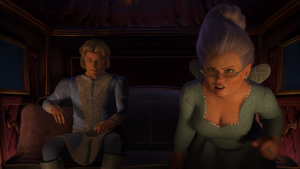 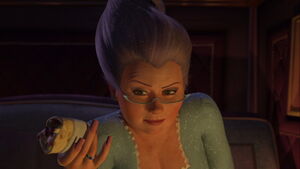 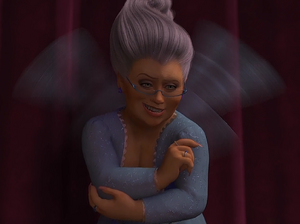 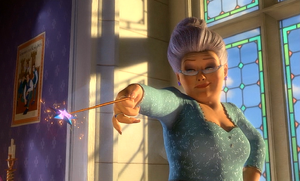 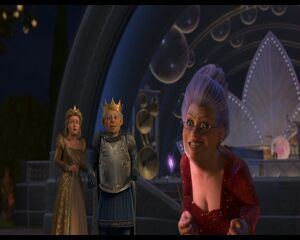 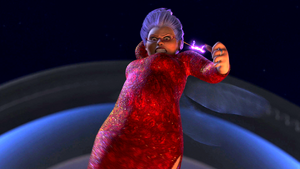 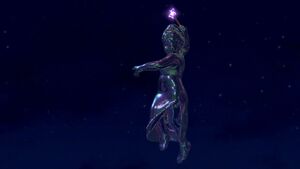 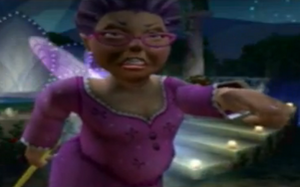 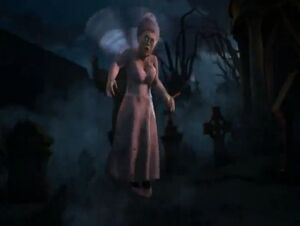 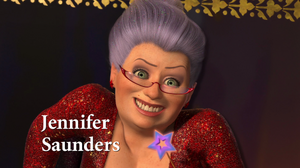 Retrieved from "https://villains.fandom.com/wiki/Fairy_Godmother_(Shrek)?oldid=2724570"
Community content is available under CC-BY-SA unless otherwise noted.