The Swords and Stars

The Stars and Swords

Sept of Remembrance, Hill of Rhaenys, King's Landing (base of operation of the Warrior's Sons; destroyed by Maegor the Cruel in 42 AC)

Knives
Religious Zealotry
Influence within the Faith of the Seven
Fanaticism

Purge the realm of "sinners"
Protect women from objectification and sexualization
Obey the orders and wills of the High Septon
Enforce the word of the Seven Pointed Star by force
Banish the faith of R'hllor from Westeros and execute Stannis Baratheon.

Known members of the Faith of the Seven who are allies to the Faith Militant are Septon Raynard, Septa Unella, Septa Moelle, and Septa Scolera.

The Faith Militant rose in rebellion against House Targaryen during the reign of King Aenys I Targaryen after several events the Faith took as slights. At the start of the Faith Militant uprising in 41 AC, Poor Fellows slew Septon Murmison for performing the incestual marriage of Prince Aegon Targaryen to Princess Rhaena Targaryen, both children of King Aenys. Poor Fellows also tried to assassinate the Targaryens in the Red Keep, but were stopped by Ser Raymont Baratheon of the Kingsguard. Aenys I's successor and half-brother, King Maegor I, outlawed armed holy men and took brutal steps to put down the rebelling orders and the houses supporting them, including offering bounties for their heads: a gold dragon for the scalp of a Warrior's Son and a silver stag for that of a Poor Fellow. This earned him the nickname of "the Cruel". Not even the death of the High Septon and his replacement for a more passive one stopped the determination of the Faith Militant.

After Maegor's death, his successor, Jaehaerys I Targaryen offered amnesty to the rebels in exchange for the disbandment of the Faith Militant.

Centuries later, during the War of the Five Kings, groups of ragged men and women known as "sparrows" start massing in King's Landing after Tywin Lannister's death. This is a result of the horrible actions and massacres from Gregor Clegane, Amory Lorch, Vargo Hoat, Rorge, the Lannister army , and Robb Stark's northern army in the riverlands. In fact, most of the sparrows are from the destroyed riverlands and the crownlands.

Incensed by the attacks on holy men and women and the sacking of septs and septries carried out by foragers, the High Septon known as the High Sparrow manipulates Queen Cersei Lannister into overturning Maegor's law and the Faith Militant is born again.

The Noble and Puissant Order of the Warrior's Sons, also known as the Swords, are anointed knights of the Faith Militant sworn to the Faith who have renounced their titles, lands, gold and possessions to fight for the Seven. They swear their swords to His High Holiness. Most of them are former hedge and household knights, but some are of higher birth such as younger sons of lords, or older lords who wish to atone for their sins. They wear inlaid silver armor over hair shirts, rainbow cloaks, and swords with star-shaped crystals in their pommels. The Swords are sworn to protect holy places such as septs or to escort the devout safely across the lands. They developed a reputation for fanaticism and implacable hatred for enemies of the Faith. They are said to be holy men, sorcerers, dragonslayers, and demonhunters.  They see anyone who whorships other gods as false or evil. This army of holy kinghts is cut from the TV series.

The current commander of the Swords is Ser Theodan Wells, called Theodan the True. A known member of the group is Ser Lancel Lannister, former Lord of Darry and head of House Lannister of Darry.

The Poor Fellows, also known as the Stars or lately as sparrows, are a more humble order for commoners and women. Thus, most of them are ragged smallfolk sworn to the Faith of the Seven and like the Swords they answer to the High Septon. Many of them are known for carving the seven-pointed star into their chests. Acting as a militant counterpart to begging brothers, Poor Fellows wander the realm and defend wayfarers on the road and escort pilgrims between septs. They accept members from all ranks of society, regardless of birth, sex or station, though they are led in battle by the Warrior's Sons. Despite not being as trained, disciplined, or well-armed as the Warrior's Sons, the Poor Fellows form the bulk of the Faith's army. They are lightly-armed footmen, who carry whatever weapons they can make or find, often axes or cudgels, and wear star badges, red on white. Before the restoration of the Faith Militant, the current Poor Fellows were just known as "the sparrows", until their leader known as the "High Sparrow" became High Septon and restored the Faith Militant. In the TV series there are no women among them and they are still simply known as the sparrows, and they refer themselves as "brothers".

In the TV series they are the only force of the Faith Militant and Lancel is one of them.

The Seven aspects of a single deity.

An High Septon with the believers.

9,000 Poor Fellows are attacked in the Battle of Stonebridge (Bitterbridge).

Sparrows (or Poor Fellows) don't recognize a king's authority over the Faith. 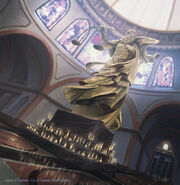 The Faith believes in the judgement of the Father, one aspect of the seven-faced god. 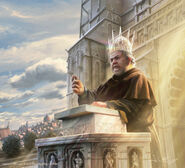 The Sparrows and the people despised the fat corrupted High Septon who died in the Riot of King's Landing.

The Sept of Remembrance used to be the high quarters of the Faith Militant, while the High Septon's seat was the Starry Sept in Oldtown.
Add a photo to this gallery

Retrieved from "https://villains.fandom.com/wiki/Faith_Militant?oldid=3595185"
Community content is available under CC-BY-SA unless otherwise noted.