My Faith
The Siren
Pestilence

Herald of the Project at Eden's Gate

Herald of the Henbane river region
Head of Bliss production

Drugging her followers with Bliss.

Be shielded from the Collapse and protect as many people as possible by delivering them into Eden's Gate (failed).

Make the Deputy see the good in what she does or kill them (failed).

Faith Seed is one of the three secondary antagonists of the 2018 video game Far Cry 5 (along with Jacob and John Seed). "Faith" is a rank in the Project at Eden's Gate and not this woman's actual name. In charge of the Bliss distillery throughout Eden's Gate, Faith is in control of making sure that the followers of Joseph are happy and blindly obedient. A manipulator and liar, Faith will say anything to sway sympathy for her cause - including violence.

She was voiced by Jenessa Grant, and was portrayed by Mackenzie Lawrén in Inside Eden's Gate.

The woman's name is not Faith (a letter from Tracey implies her real name is Rachel and the two of them were close friends before she joined the cult). She was the herald of the Henbane River region of Hope County.

Of course given her manipulative nature anything that Faith says can be doubted.

Faith was present when a group of US marshals entered Hope County with the intent to arrest Joseph Seed. With the interference of cultists, the arrest of the Father stopped and Marshal Burke was placed under the control of Faith thanks to a Bliss overdose.

A Leap of Faith

The Deputy begins to liberate Henbane River so Faith ambushes them in a Bliss-induced hallucination and transports them to a place called "The Bliss", a realm that all Bliss-users are linked together thanks to a state of euphoria. She explains to the Deputy her backstory to convey sympathy and displays her powers in The Bliss by flying the Deputy and herself to the statue of Joseph. Marshal Burke is also there under an overdose of Bliss and jumps from the statue; the Deputy follows but the hallucination ends upon impact and they wake up surrounded by corpses (implying that Faith manipulated other followers to commit suicide). Her voice is heard, promising they will meet again when they are ready.

Faith often appears as a hallucination to taunt the Deputy, usually creating visions of herself, hostages and even replacing docile animals for more dangerous ones whenever the Deputy approaches.

One time, the Deputy enters The Bliss yet again and meets Faith who leads them to a sermon with other cultists and Marshal Burke listening to Joseph. He attempts to reason with them by manipulating The Bliss into showing his vision of the collapse that's a massive explosion then a world on fire. The Deputy is only woken up by Tracey and Whitehorse who uses a syringe to let them violently exit The Bliss.

When the Deputy re-enters The Bliss, Faith is more hostile this time yet she still attempts to make them see the reason of her actions. Using Marshal Burke as a puppet, the two go on a boat ride across The Bliss where he explains that despite what they believe he does not want to be saved (whether this is the marshal on a Bliss overdose or Faith speaking him through him is unknown. When the boat ride is over, the Depity chases Burke and remove some him from The Bliss, infuriating Faith.

Entering the Bliss yet again, Faith is outwardly aggressive towards the Deputy this time and pushes them around to a vision of Marshal Burke and Virgil, a helper of the Cougar Resistance. She derides the Deputy for trying to be "a hero" and described their hubris with a comparison to the Greek gods - as a punishment she forces Burke to shoot Virgil, opens the gates to the prison stronghold for the Resistance that lets in the cultists and then shoots himself. The Deputy awakens from The Bliss and saves the prison from being overrun by Peggies and discovers that Sheriff Whitehorse was kidnapped. They leave promising Tracey that they will kill Faith as she cradles a dead Virgil.

Prepared to confront Faith in The Bliss, the Deputy finds Faith and Whitehorse taking a walk whilst singing a hymn together - she warns the Deputy to not interfere with Whitehorse and transports the two of them to a large area. She is able to replicate herself, fly and produce Angels to attack the Deputy all whilst firing energy blasts and screaming in frustration over their continued defiance - claiming that she was forced into this life by Joseph's threats and supply of drugs. Ultimately, the Deputy defeats Faith where she claims that even though Joseph believes himself the saviour, they will be the end before entering the river and succumbing to her wounds. Her essence in The Bliss is transmogrified to that of a flower which the Deputy plucks from the ground.

As stated by others, Faith is a siren leading others to their doom whilst keeping them blissfully happy. Being a master manipulator, she easily conveys herself as a victim to garner sympathy and loyalty for Joseph yet this only hides her cruelty. Faith sees little to absolutely no wrong in any of her actions as in her mind she's providing happiness and peace to her followers who make their decisions to be part of The Bliss on their own, spinning her enemies as violent extremists attacking innocent people.

To help manipulate her victims, Faith likes to depicts herself as innocent and childlike as can be seen in The Bliss where she often giggles, runs and skips around to appear harmless. Her likeness such as dressing completely in white and attempting to appear pure is to make herself appear like a flower - both in attempt to help her manipulations and convince herself, despite this Faith holds doubt in her own purity due to her implied past of drug addiction and her true value to the Seed family. Although Joseph grieves as much over Faith's death as his two brothers, a letter implies that she felt some doubt in The Father's mission and was worried if he would punish her for it.

Despite claiming to be loyal to The Father for accepting her for "who she is" and giving her a new family, Faith apparently lives in fear of whatever punishment Joseph will inflict upon her should she disappoint him. As the fourth Faith, she is constantly worried that one day she could be replaced like her predecessors - this is especially evident when the Deputy burns her personalized Words of Joseph and she sounds terrified over what he'll do to her. During her fight with the Deputy, Faith screams that was she bombarded with drugs and threatened by him to do his bidding at a young age.

Of course as Virgil, Dutch, Tracey, Whitehorse and virtually everyone says Faith is known to be a liar so everything she says holds some doubt. 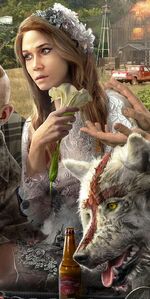 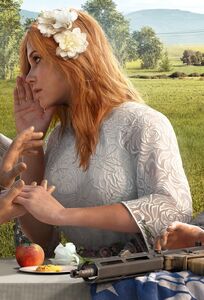 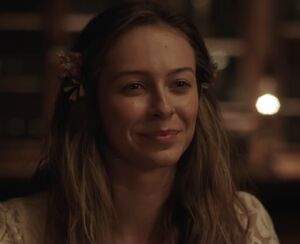 Faith in the short-film Inside Eden's Gate. 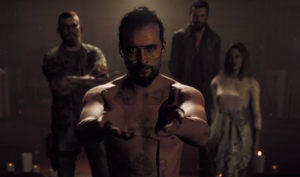 Faith with her adoptive family in the opening. 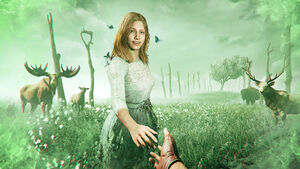 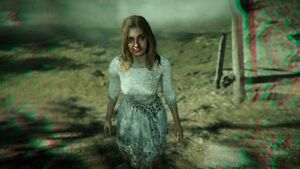 Faith Seed upon her defeat, moments before her death.