Hallowed Knight of the Forest Elves

Control of a giant falcon

Steal the Key to the Holy Sanctuary of the Dark Elves for the Forest Elves to conquer and kill anyone who tries to stand in his way.

"Falconer" (real name unknown) is a sadistic NPC Hallowed Knight of the Forest Elves, who serves as the main antagonist in the fifth and seventh volumes of the Sword Art Online Progressive manga (with his role being greatly expanded from the light novel it was adapted from), as well as the archenemy of the series' supporting character Kizmel, after murdering her sister in cold blood.

One month before the start of the series, Falconer's superiors with the Forest Elves (who were at war with the Dark Elves) ordered him to go to the small Dark Elves town of Lyusula in order to steal their "Secret Key", which gives them access to the Dark Elves's Holy Sanctuary (the goal being to destroy the Dark Elves's spiritual centre and source of hope). Using his giant falcon as a distraction, Falconer set fire to the city and stabbed one of its herbalists in the chest, not realising that the man he killed had been in possession of the key and had handed in to his fellow herbalist Tilnel (sister of the knight Kizmel). After the herbalist unintentionally pointed to Tilnel with his eyes, Falconer threw his sword at Tilnel's chest, killing her instantly just as she had reached her husband's view. Falconer smiled sadistically as he watched Tilnel die in her husband's arms.

As he killed Tilnel, his falcon stole the key and he gleefully walked away, proud of his acts of brutality. Kizmel and Tilnel's husband then vowed to avenge her death, and spent the next month searching for her killer. Eventually, Kizmel caught up with Falcolner and the pair began to brutally duel with swords. Seeing the two NPCs as "quests", Kirito and Asuna (the series' main protagonists) chose to assist Kizmel at random, and teamed up with her to help defeat him. Seeing that Kirito and Asuna were siding with Kizmel, Falconer called them fools, and vowed to "dye his sword red" with all three of their blood, seeing none of them as much of a challenge. After putting up a considerable fight, Kirito and Asuna slashed Falcolner below his armour in the stomach, critically injuring him.

Despite admitting defeat, Falconer refused to give up his key, and threw it up to his giant falcon, before sacrificing his defensive armour in order to restore his health. He then decided to comment on how much Kizmel resembled the herbalist he had murdered when he stole the key, smiling as he did so, before that he knew who Kizmel was. After noting that Asuna was the weakest of the three fighters, he set his falcon upon her, but was surprised to see that Tilmel's husband (a wolf-handler knight of the Dark Elves), who set his wolf upon the falcon and attacked Falconer with his own sword.

Continually smiling, Falconer dodged and weaved between his foes attacks, all while concentrating his own attacks and his bird on Asuna. After noticing that his opponents were all beginning to tire, Falconer suggested calling the whole fight off and just walking away with his stolen goods, before throwing the key into the air. In an attempt to grab it, Asuna was caught by his falcon and dropped several metres from the air, only to be caught and saved by Tilnel's husband.

Taking advantage of his opponent's heroics, Falconer stabbed the distracted wolf-handler in the back, giving yet another sadistic smile as he did so. Falconer then faced a brutal onslaught of attacks from Kirito and Kizmel in retaliation for his actions, in which he was slashed across the chest. Unwilling to be hurt further, Falconer fled using his falcon, vowing to return soon for the key. 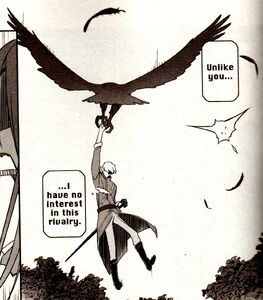 Falconer runs away in order to heal.
Add a photo to this gallery
Retrieved from "https://villains.fandom.com/wiki/Falconer?oldid=3702173"
Community content is available under CC-BY-SA unless otherwise noted.