Draining energy from the land.

Consume everything in its path (failed).

False Groudon is the final antagonist in the sixth Pokémon film Jirachi: Wish Maker. It is a malevolent clone of the real Groudon that was unwittingly created by Butler.

False Groudon resembled the real Groudon, but was much more demonic in appearance. It had lifeless yellow eyes, goopy teeth, and when it roared, a fiery, lava-like pattern appears on its underside. Its spikes and claws can transform into turquoise blue tentacles that it uses to consume other living beings.

According to Butler, it was overall a destructive incarnation of absolute evil.

After Butler was exiled from Team Magma following the failure in creating a Groudon from a fossilized remnant, he used Jirachi's power from the Millennium Comet to bring the fossil back to life, believing he could impress Maxie enough to rejoin Team Magma. However, instead of creating Groudon itself, an evil monster resembling Groudon came to life. It went completely berserk and destroyed everything in its path, toppling plants and consumed people and Pokémon by absorbing them into itself through its tentacles. Ultimately, the monstrous beast met its end when Jirachi used Doom Desire to obliterate the clone, freeing the consumed Pokémon and people so that they would not die. Once it was eventually defeated by Jirachi, everything went back to normal. 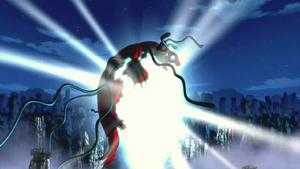