One day while sealed a giant drip, bigger than any drip before, came from the Shadow Blot's Prison Bottle, this giant drip would become the False Shadow Blot who took the Blot's position as leader of the Blotlings and dethroned Oswald

The Shadow Blot manages to temporarily escape Wasteland and enter Yen Sid's lair and Mickey's house, pulling Mickey into the lair and into Wasteland where he fights Mickey before attempting to drown Mickey with himself before crashing into Dark Beauty Castle, where the Shadow Blot leaves Mickey to be kidnapped by the Mad Doctor, not realizing that his fight with Mickey in the sky had left some of himself soaked into Mickey

Due to the parts of himself that are soaked into Mickey, Mickey can use the magic paintbrush, a defining part of the story of Epic Mickey, also more splotches of the Shadow Blot rise from Mickey the more Thinner he uses, less splotches rise the more Paint he uses

After the events at Dark Beauty Castle, behind the scenes the Shadow Blot begins rallying the Blotling army

At the Tomorrow City Exhibit, realizing Mickey's growing potential and power, he sends a Slobber to deal with Mickey, Gus commenting that if the Shadow Blot sent a Slobber than that means he really wants to stop Mickey, however Mickey manages either to erase the Slobber with Thinner or befriend and redeem the Slobber with Paint

Once the Blotling army has been fully rallied up, the Shadow Blot attempts a full-scale assault on Mickeyjunk Mountain, forcing Oswald to deal with many Slobbers to protect the Prison Bottle that holds the Shadow Blot, Mickey comes to help, however the Shadow Blot appears and roars at Mickey, commencing the penultimate boss of the game

If Mickey decides to use Paint to battle the Shadow Blot, he must slowly cover the villainous 2nd-in-command in blue, once he is completely covered, the Shadow Blot rises into the air with the same affects as all befriended Blotlings, however the Shadow Blot refuses Mickey's friendship and pushes the Paint off in a energy blast and seemingly flees, however he goes behind Mickey and grabs him, it seems Mickey is finished, however the Paint had soaked into the Shadow Blot's core, he then hugs Mickey to death and tickles him before putting him down and booping his nose, he then leaves with a wave, possibly to Blot Alley, with Gus commenting on how sweet he is

Even if the Shadow Blot is erased or befriended, the Blot still manages to break free from his prison, meaning the Shadow Blot's goals ultimately were achieved in the end. 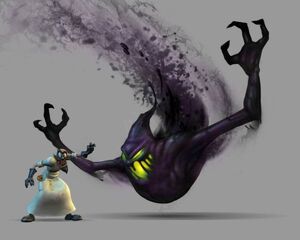 The False Shadow Blot with the Mad Doctor 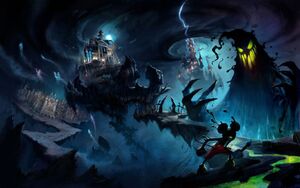 The False Shadow Blot in artwork 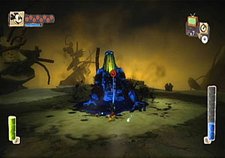 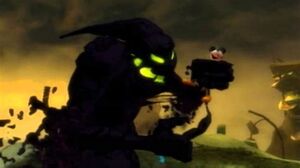