Family's Cat, or Claudia's Cat, is the mascot of the fat lady who bought a Toto in the supermarket and supporting antagonist in 2006 film A Movie of Eggs. Toto that distract him since this did not let the eggs escape from the kitchen. He caught Toto and Willy just before they left the window, by chance before the lady ate to lock in a cage.

Apparently it is a cat of woolly yellow coat (possibly also due to its fat), with green eyes, brown stripes and a vanilla-colored belly. Usually devour the eggs and food of the family without them knowing, without caring to disobey the laws of the house and take possession of it, while the occupants are not there.

The only way in which the eggs could escape from the kitchen was to sistraer and drive the cat away, choosing toto as the egg runner.

After a risky pursuit, the cat was finally able to leave the door in the direction of a dining room, where there was a family sofa and there the cat would discover that this would be the hiding place Toto, where he met a lost chocolate egg.

Then the cat ran after the two friends, back to the kitchen to escape through the window of the home.

Unfortunately Willy and Toto did not get their freedom, being about to be swallowed by the mascot, because the owner punished him by locking him in a cage, thinking that he ate all the eggs in the basket. 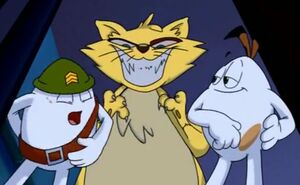 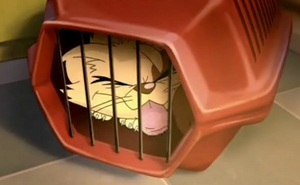 Defeat of the Cat
Add a photo to this gallery

Retrieved from "https://villains.fandom.com/wiki/Family%27s_Cat?oldid=3536251"
Community content is available under CC-BY-SA unless otherwise noted.