Fancy Dan is a villain from the Marvel universe who primarily antagonizes Spider-Man, along side The Enforcers.

Daniel Brito (aka Fancy Dan) was born and raised in Brooklyn, New York. He was a small child so learned to stick up for him by learning various martial arts such as judo and karate and other fighting techniques. Fancy Dan worked with Montana (Jackson Brice) and Ox (Raymond Bloch), and these three thugs teamed up to form a mercenary team called the Enforcers. As his work with the Enforcers became more important than supporting his family, Ginger Brito filed for divorce and moved to Atlantic City with her son, Rudy, where she would remarry.

The Enforcer soon became the first henchmen of the crime kingpin Big Man, being defeated by Spider-Man. Later, they teamed up with the Green Goblin and Sandman. They also clashed with other superheroes, including the Human Torch and Daredevil.

Fancy Dan and the Enforcer were then hired by the Lightmaster (Dr. Edward Lansky), whose plans were stopped by Spider-Man as well. They then took up work with the so called Tech-Master, as he was after revenge against Harry S. Osgood, but this time they did not meet Spider-Man, they ended up battling the mutant musician Dazzler. Fancy Dan and the Enforcer even went up against the powerhouse known as the She-Hulk.

Fancy Dan alongside Ox and Montana came back together to work for Mister Fear, which pitted them directly against Daredevil. After Mister Fear's arrest, the Enforcers were taken in by the Hood's organization.

After many years of crime and even more of defeat, Fancy Dan and the Enforcers were next seen as patrons at the Bar with No Name. The gang placed bets with John Ladue nicknamed "The Bookie" as they watched Spider-Man on TV battle a up and coming new villain called the "Basher". Spider-Man eventually showed up to stop Basher, but Fancy Dan was suspicious of the fight. As he said "Spider-Man's butt is too big", they all laughed, but Fancy Dan’s theory was proven right as the true Spider-Mann turned up soon after. Due to the fact they were being conned, they decided to attack the Bookie and forced him to return their money. The Bookie's father tried to contact Spider-Man out of fear to help rescue his son. The group was defeated once again and the Bookie was rescued.

Fancy Dan appears alongside the Enforcers. He is a short black man with a lot of martial arts moves. He is first seen in a meeting with Ox, Montana (Later Shocker) and Hammerhead. He is sent by the big man (Tombstone) to kill Spider-man with the Enforcers and along with the help of the Vulture. But when he is about to attack Spider-man he webs him up and throws him toward Ox and he is left for the police along with the Vulture, and Ox, but Montana escapes. Later he busts out of prison with Doc Ock, Vulture, Sandman, Rhino, Ox, Electro, and Montana (Now Shocker). He and Ox go off with Hammerhead but the other six go to kill Spider-man but fail again. He is later seen training with Shocker and Ox and he renames himself Ricochet. The three now call themselves the New Enforcers. Together they rob banks and try to kill Spider-man while they are at it. But they get defeated and go to jail again. He is next seen in jail. While Spider-man is teasing all the crooks that he put away the Green Goblin opens the cell doors and he fights Spider-man alongside Ox, Montana, Mysterio, Silvermane, Molten Man, and Rhino. But the Cat Burgler turns knockout gas on and he gets knocked out and is put back in prison. 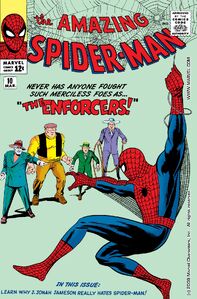 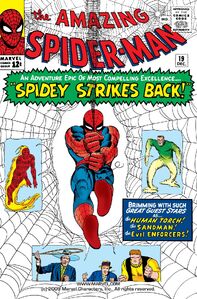 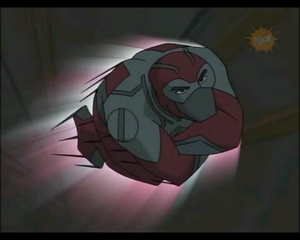 Dan as Ricochet.]]
Community content is available under CC-BY-SA unless otherwise noted.
Advertisement