Sink the economy and blame it on President Black Cat.

Use Schrodinger's Box to hide the cats.
Get Mittens 2.0 elected.

The Fancy Feast Council are a group of cats who serve as the main antagonists of the YouTube series, Politicats. They are a parody of the Republican Party.

They first appear when the two Se-Cat Service agents report to the Grey Cat that they have lost Black Cat. Angered, the Grey Cat uses his powers to take away one of the pairs' lives, before sending them off again.

Grey Cat then inquires how Mittens 2.0 is coming. The Scientist Cat states that, while they have perfected the joke function, they are still working on "de-Mormonizing" him.

After seeing that Black Cat's Operation: Lucky Cat is giving their money to the people, the Grey Cat becomes angered at the redistribution of wealth.

After seeing Black Cat's presidential ad, the Fancy Feast Council put out an ad stating that Black is a Martian Muslim and featuring Mittens 2.0 riding a monster truck that turns into a bald eagle.

The council later attended the presidential debate between Black Cat and Mittens 2.0, with Wonky using a controller to dictate what Mittens says. However, when Black Cat starts to get the upper hand in the debate, Wonky presses a button that causes Mittens to fly through the roof.

For his screw-up, Wonky gets kicked out of the council by the Grey Cat, who is also revealed to be his dad. In response to losing the debate, the Fancy Feast Council opts to pass out Schrodinger's Box, which they intend to use to hide the cats instead of making them poor.

The council at some point hired two Ninja Assassin Cats to assassinate President Black Cat and the First Lady, however both of them failed and were killed.

The Fancy Feast Council soon finds that Mittens 2.0 has began recreating itself, allowing it to skyrocket in the polls. They also discover that he is now being controlled by a mysterious sentient Cat Painting. The Cat Painting informs them of another world they can go to.

While initially hesitant, after the Martian Armada attacks Earth and starts an all-out global war, the council opts to go with the painting's solution. Before they can fly to the planet though, the female member of the council drinks herself to death.

While flying through space, the council passes by Wonky and his new Dog Wizard friend coming out of a wormhole. The wormhole sucks up the cat in a top hat and monocle, leaving Grey Cat as the only remaining member of the council.

Grey Cat and the Painting later arrive on the planet, though Grey Cat is disappointed to find its a barren wasteland. Grey Cat gets angry at the Painting, who then directs him to his "servants", a group of turtle cats, before fading away.

The council gathered around a table 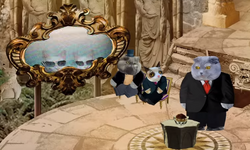 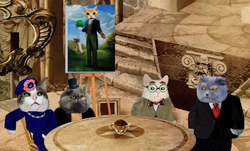 The council and the mysterious painting

The council's secret lair
Community content is available under CC-BY-SA unless otherwise noted.