One of Chris' assistants

Attacking his enemies and beating up his old foe Scott

Get revenge on Scott for stealing his tooth (succeeded)

Eat Scott or any contestant he comes across (failed)

Fang may have been one of the same sharks in the first season.

Fang is a shark that was heavily mutated due to the radiation that pollutes the island. Because of his mutation, he now has larger eyes, upper and lower limbs, and even the ability to breathe on land. In the Total Drama: Revenge of the Island opening sequence, he is shown leaving the confessional and scaring Scott, who proceeds to run away in fear. This, in a way, foreshadows the rivalry between the two.

His first appearance in an episode was "Truth or Laser Shark" when Chris dunked the contestants in the lake to demonstrate the rules of the "getting to know you" trivia game. Fang attempts to eat the contestants, but fails to do so. When he swallows Scott, the latter escapes, breaking off Fang's tooth and keeping it as a souvenir.

In "Finders Creepers", Fang makes a short appearance when Scott attempts to hide the souvenir of his team in a grave in order for them to lose the challenge again. However, that ends up not happening after Fang pops out of the grave and begins chasing Scott only to fall into a grave and growling in angry frustration shortly afterward.

In "Backstabbers Ahoy!", Scott is heard mentioning the "Man-Shark" (who is obviously Fang) in his sleep. Later, he bites the top half of Dakota and Bridgette's boat off, which was covered in food. While Brick is running underwater during the challenge, Fang pulls on his cord and then begins to chasing him until Lightning pumps too much air into Bricks suit and Fang bounces off it. Fang chases the Mutant Maggots during the challenge until he is punched in the face by Vito. He is later seen next to Dakota who is shown hitting him with a bucket to keep him away, which angers Fang. At the end of the episode, he is seen circling Dakota, who is on a buoy, as she calls out for help. Interestingly, this is the one episode, despite his appearance, that he completely leaves Scott alone.

In "Runaway Model", Fang is shown trying to lure Scott into a trap using a slice of pizza as bait. Scott does not fall for this plan and instead tricks Fang into taking the toppings off the pizza. When Fang tries this, Scott cuts the rope with his "lucky shark tooth" and traps Fang in his own trap as he gets away with the pizza slice.

In "The Treasure Island of Dr. McLean", the contestants find themselves stranded in the middle of the lake, giving Fang the environmental advantage to hunt Scott. When the Mutant Maggots try to sneak pass the giant squid while it is attacking the Toxic Rats, Fang shows up, scaring Scott. He then climbs to their raft but was punched away by Dakota with her recently gained super strength.

Chef uses Fang in "Grand Chef Auto" to guard Lightning and Jo once he caught them. Once they broke free, Jo uses Lightning as a distraction in order to get ahead. However, Lightning makes a deal with Fang; if Fang helps him get to each station, he will bring him to Scott, which Fang agrees to. Fang manages to eat Scott at the end, but Scott escaped by spraying paint into his mouth, which caused Fang to spit Scott out of disgust.

In "Up, Up and Away in My Pitiful Balloon", Fang is seen chasing Scott in the beginning of the episode and Scott trips on a rock and fang reaches him. Scott tells fang to eat him fast and starts putting salt on himself to prepare to be eaten . However, Fang was distracted by the voice of Chris' blimp arriving to the island and this enables Scott to escape after kicking Fang's groin. Later when the challenge begins, Fang shows up behind Scott and continue to chase him but his leg accidentally caught on the rope of Jo's hot air balloon and he flew into the air with her. After Scott's wings were burned by the mutant goats, under Zoey's command, Scott landed on Fang and along with Jo, they crash into the lake where Fang continues to chase Scott.

Throughout "Eat, Puke and Be Wary", Fang tries to hunt down Scott to no success. After Scott is eliminated, it is revealed that Chris had arranged for Fang to appear just as he was about to take the Hurl of Shame. Fang then takes his tooth back and joins Scott in the Hurl of Shame.

Before the battle between Cameron and Lightning in "Brain vs. Brawn: The Ultimate Showdown", Fang rejoins the eliminated contestants in the audience and is chained down next to Scott. It is shown that Fang had "a little too much fun" with Scott after they were hurled, leaving Scott in a comatose state and in a "trauma chair" as a result. During the battle, Lightning deflects an electric blast from Cameron's handcrafted battle suit right at Fang's mouth, ironically destroying all of his teeth, much to Fang's devastation. Fang was likely quarantined along with all the other animals at Camp Wawanakwa when the government took control of the contaminated island at the end of the finale.

After recovering his teeth, Fang appears in "Heroes vs. Villains" as part of the challenge where he and two other sharks are guarding a key to the spa from the contestants. The contestants from season four (especially Scott) are noticeably afraid of his presence when he waving them in a sadistically act.

Fang reappears in Suckers Punched as Scott's opponent during the boxing challenge. Scott immediately becomes paralyzed at the sight of Fang and the mutant shark brutally beats him, resulting in Scott losing the challenge.

In "You Regatta Be Kidding Me", in order for the raft he, Scott, Zoey and Duncan are on, to gain speed, Cameron uses Scott to lure Fang to chase him. Fang is then tied to the raft and the group starts to keep up with the others. Eventually, Fang is able to bite down on Scott, causing him to fly up into the air and land on the raft. Scott bitterly pushes Cameron into the water with Fang who smells Cameron before leaving. In a confessional, Scott says Fang probably wanted a meal, not a snack.

In "The Bold and the Booty-ful", Fang appeared during Scott's part of the challenge where he was guarding the diamond that was hidden in his mouth much to Scott's displeasure. Fang then starts to chase Scott around but Scott manages to hide up on the sail and Fang waits patiently for Scott to come down. Scott then ropes Fang around his nose but the mutant shark easily pulls Scott down and drops several objects onto him. Fang then finally beats up Scott after Mal tricked him into walking into a rope trap and Scott wasn't able to retrieve his item from the mutant shark.

In "The Final Wreck-ening", Fang appears during Chris' demonstration of the final challenge, as an obstacle in the swamp moat, eating a mutant fly. Fang attempted to eat Zoey but was punched away by a reappearing Mike and ironically loses his tooth in the process. Fang then starts to chase Alejandro and Heather around while they were in the water. 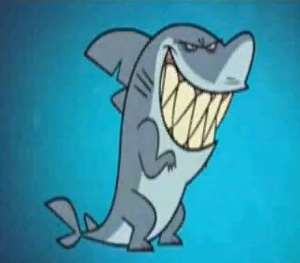 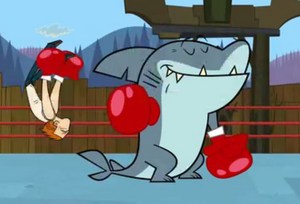 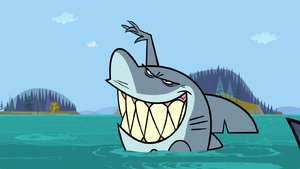 Fang appears in TDAS waving at the contestants (including Scott)