General of the Fangpyre Tribe

Get revenge from the other tribes (abandoned)

He was voiced by Mackenzie Gray.

Fangtom and his tribe were freed by Lloyd Garmadon, who explained that he was seeking vengeance on the Hypnobrai tribe after they betrayed him. Fangtom agreed to the plan, but mentioned that his tribe was few in numbers and that they would need reinforcements. Fangtom and his army then went to Ed & Edna's Scrap N Junk, turning the items of the junkyard into Fangpyre vehicles. Fangtom and his tribe then rolled into the Frozen Wasteland, but called off the attack when he saw Skales leading the Hypnobrai. The two generals welcomed each other's company, revealing that they had been great friends before being sealed away. Afterwards, Fangtom found himself and his fellow generals challenged to a Slither Pit by Pythor, with the stipulation that the Serpentine would submit to the latter's leadership if he successfully defeated the other four generals simultaneously, which he did (thanks to Skales's help).

After the Great Devourer was freed and destroyed, Fangtom watched as Skales tried to lead the Serpentine as the Snake King. However, he was left alone with the other Generals as Garmadon lead them, instead. After discussing how to win back their Serpentine, Fangtom, Skalidor, and Acidicus robbed the bank and headed toward the subway. There, they fought the Ninja while also revealing it’s just a ruse to distract them while Skales kidnaps Lloyd. They escaped when they had the chance. He and the other remaining generals soon joined up with Lord Garmadon who presented them with his new Mega Weapon, though the Fangpyre general doubted that Garmadon knew how to use the weapon. Garmadon eventually did figure out how to used it (by accidentally reviving Captain Soto and his crew) and thus the Serpentine stood by him. afterwards he and rest of the generals freed Skales, who would later betray Garmadon and become the new snake king, but after Skales' plans of buryng Ninjago City underground backfired with the Serpentine getting trapped within the Stone Army's tomb, Fangtom, along with the rest of the Serpentine (with the exception of Pythor), decided to redeem himself. 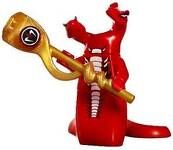 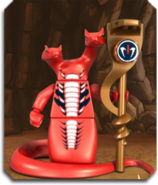 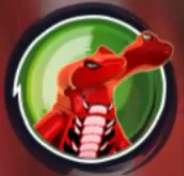