Watching the city with monitors.

Set his twin Brad Majors in the padded cell forever.

Convince Brad's wife Janet to marry him.
Take over the world with his food brand.

Farley Flavors is the main antagonist of Shock Treatment, the sequel of The Rocky Horror Picture Show.

He is the CEO of the company Farley Flavors' Faith Factory, which turns the city of Denton into a giant television studio.

He was portrayed by Cliff De Young.

Farley Flavors is not seen first, for many moments you only saw a man sitting in front of many monitors, watching over Denton. Finally, he shows himself in a video clip and asks Janet Majors, who's in the care of the television moderators while her husband Brad is trapped in a padded cell for the "treatment", to be his "Girl Next Door", and Janet agrees. In one day, Janet becomes Denton's star. However, Janet's friend Betty Hapshatt finds out that Farley is Brad's twin brother, and Farley has had Brad committed so he can have Janet for himself.

When Betty and Judge Oliver Wright (who is played by Charles Gray, who portrayed Ernst Stavro Blofeld in Diamonds Are Forever) help Brad escape, Brad confronts Farley. When Janet realizes that Farley has been using her, she returns to Brad. Farley sends both in a cell and invites Denton's whole population into the studio. Because the guard of the cell runs with them, too, Brad, Janet, Wright and Hapshatt escape. Even though Farley's duplicity has been exposed, he manages to convince the townspeople that he can make them all "success stories", and they worship him as the film ends.

Farley Flavors is a very charismatic man, knowing just what to say to convince people what to do, this could also unarguably be seen as manipulative.

Although he may be charismatic at some points, he is also shown to have quite a temper, we especially see this in the Duel Duet sequence when Brad confronts him. Farley loses his grip and baselessly insults Brad as Brad makes valid points about Farley's character. 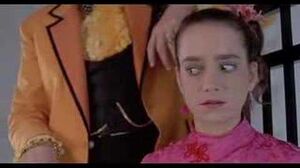